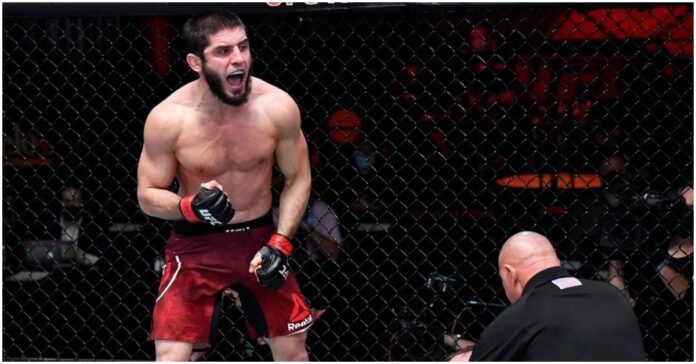 Islam Makhachev has given his version of the story after it was recently reported by Dana White that Makhachev had turned down the opportunity to face Rafael Dos Anjos on short notice at UFC 272.

In his version of events, Makhachev revealed that he did offer himself up as a replacement for Rafael Fiziev, however following discussions with the UFC he backed out of the idea due to the company denying a “very small” request that he had.

Makhachev spoke to Brett Okamoto to share light upon the situation. It had been rumoured Makhachev wanted $1 million to step in on short notice against Dos Anjos but he has openly denied this claim.

“You know, Brett? Dana said I turned down this fight but Monday morning when I woke up I just saw some news that [Rafael] Fiziev has COVID, the fight [is at a] standstill. I’ve been in California on vacation and I woke up and called my manager. [I said], ‘Hey Ali, I saw some news, please call the UFC and say I’m ready to take this fight.’ And I asked about some condition, very small condition. Nothing big, not [impossible] to do… But UFC [did] not do it that’s why it did not happen.”

It appears that both the UFC and Makhachev couldn’t agree on this issue meaning the fight fell through and Renato Moicano bravely stepped in on short notice. Makhachev revealed he called for the RDA fight and contacted the UFC himself, not the other way around.

“I just wanna help UFC for the fans, for everybody because this is like pay-per-view show. It’s big show. I just asked for very small condition, but UFC say no and that’s it.”

Despite this, it seems the UFC is now looking to rebook the Islam Makhachev Vs. Beneil Dariush fight with the winner being next in line for the title shot following Dariush having to pull out from their initial matchup due to sustaining an injury. This may suit Makhachev better given he feels Dos Anjos is not on the same level as him and beating him would have changed nothing.

“You know, I sat on the first row and watched this fight, dos Anjos not my level fighter. If I beat him people still talking like, ‘This is old man. He’s not from top 5.'” (transcribed by Sportskeeda.com)

Should Islam Makhachev be next in line for a title shot?