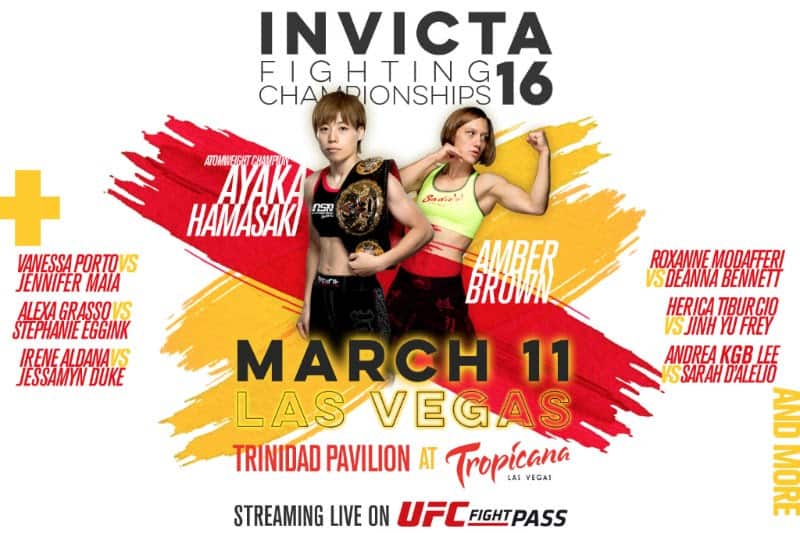 It was once again fight day here at LowKickMMA, and the talent on display tonight (Friday, March 11th, 2016) will come from in the form of Invicta FC 16. Headlining the card are Ayaka Hamasaki and Amber Brown, but there’s a whole bunch of great fights also taking place on the preliminary section of the card.

Ayaka Hamasaki (13-1) and Amber Brown (6-2) met in an atomweight title bout in the main event. Hamasaki got a takedown after ducking a strike early in round one. Hamasaki worked her over with strikes. Brown went for a triangle choke off her back and landed some elbows. Hamasaki got half guard and ended the round on top. Brown turned things around in the second round. Brown took her down midway through the round after some good clinch work, and Brown locked in a triangle choke, but the round ended. In the third round, Hamasaki took her down and locked in an armbar for the win. Hamasaki remains champion.

Vanessa Porto (18-7) and Jennifer Maia (13-4-1) met in an interim flyweight title bout in the co-main event. Porto took her down early in round one in the round and got on top, but didn’t do much and Maia got to her feet. Porto tagged her with a right hook under a minute to go. In the second round, Porto got an early round takedown and worked her over with strikes for the majority of the fight. In the third round, Maia comes out and starts blasting her with strikes. Maia took her down late in the round and attempted a guillotine choke, but couldn’t finish the fight with it. Maia started to dominate the fight with her striking and grappling. In round four, Maia clinched with her and then pressed her up against the fence. She landed a series of knees until Porto took her down to end the round. Porto got a big slam takedown late in the fifth round, but Maia locked in a guillotine choke. She didn’t finish the fight. After a tough fight, the judges gave Maia the win by decision. Maia is the new interim champion.

Stephanie Eggink (4-3) and Angela Hill (4-2) met in a strawweight bout. There wasn’t much to say about the first round as there was not a lot of action. In the second round, Hill was the more aggressive fighter in this round and was pressing forward. Hill landed a huge overhand strike that dropped Eggink to end the fight. Eggink was bleeding heavily from her nose.

Irene Aldana (6-2) and Jessamyn Duke (3-4) met in a bantamweight bout. Aldana started to light her up halfway through the first round. She then blasted her with a straight right then poured on the strikes and the fight was stopped.

Roxanne Modafferi (19-12) and DeAnna Bennett (8-2) met in a flyweight bout. Modafferi dropped her with a straight right early in round one, but Bennett picked her up and slammed her down to the ground few minutes later and dominated the round. Modafferi tagged her with a left hook at the beginning of the second round. Bennett was rushing in with her strikes and used lot of strikes. Both girls tried to make it to the end of the fight while competing in round three. Close fight that saw Modafferi win the fight by split decision.

Herica Tiburcio (9-3) and Jinh Yu Frey (5-1) met in an atomweight bout. Not a ton of action in round one. Tiburcio and Frey were using a lot of kicks. Things picked up in the second round, and both girls were really going at it in this round. Frey dropped her with a straight right to end the round. Both girls kept the fight on the feet and struck it out in the third round. Tiburcio got a late round double-leg takedown into half guard. Frey won the fight by decision.

Andrea Lee (4-2) and Sarah D’Alelio (9-6) met in a flyweight bout. Lee used a lot of kicks during round one. Not a ton of action. Lee blitzed her with strikes late in the round then clinched and landed some knees to the face. Business picked up in the second round. Both girls wanted to take the fight to the ground and did. The fans were entertained by some great scrambles and lots of action. In the third round, D’Alelio turned things around with a late round takedown and got her back that led to her submitting Lee with the rear-naked choke.

Opening the UFC Fight Pass prelims was Ashley Greenway (1-0) vs. Sarah Click (0-1) in a strawweight bout. Not a ton of action in round one. They kept in on the feet and started to pick up the action late in the round. In the second round, Click came out fast and was throwing a lot of strikes that were landing. Click was stalking her as the round went on, but Greenway was moving well and deflected most of her strikes. In the third round, Greenway got an early takedown and got back mount. She went for a triangle choke and then an armbar. Neither of those she could finish the fight with. In the end, the judges gave Greenway the win.