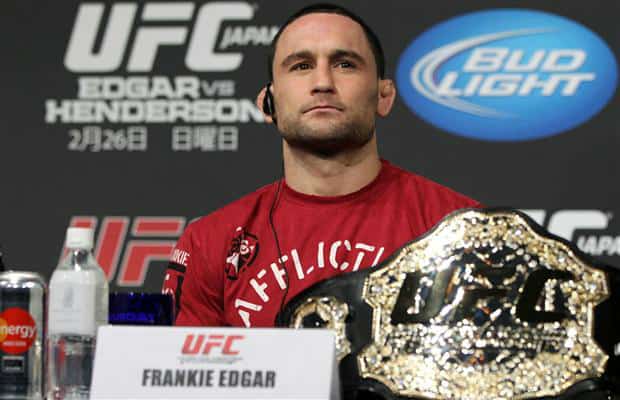 By now, we all know the story of Jose Aldo, and Conor McGreor. The two men were supposed to square off in the biggest fight of all time for Aldo’s featherweight title at July’s UFC 189, but the champion was shockingly forced out due to a rib injury.

Former title challenger Chad “Money” Mendes would step in on two weeks’ notice to meet McGregor for the interim title, a fight the “Notorious” one ultimately won via second-round TKO. The Irishmen now sports UFC gold of his own, and the title unifier between he and Aldo is set for December 12, 2015 at UFC 194.

However, surging contender, and former lightweight champion Frankie “The Answer” Edgar still believes that he should’ve been the man to step in when Aldo suffered an injury, and many fans believe the same. Edgar is now scheduled to meet Mendes on December 11, 2015 at The Ultimate Fighter (TUF) 22 Finale with the winner likely to receive a title shot.

If any injuries once again ruin Aldo vs. McGregor, however, “The Answer” recently confirmed that he will be the man to step in this time:

“If someone gets hurt I’m the guy stepping in,” Edgar said in an interview posted on UFC.ca. “And that’s from (UFC President) Dana White. You can print that in bold letters!”

Edgar dropped down to 145-pounds in 2013, taking Aldo to a considerably close five-round decision that the champion ended up winning. Since then, the former 155-pound champ has rattled off four straight wins, and wants to capture his second world title whether it be against the money man in McGregor, or the champion in Aldo:

“I want that title,” Edgar said. “That, to me, is the most important thing. Conor may be the money fight, but when you win a title that stays with you forever. Money comes and goes. You’re a champ for the rest of your life. I did it at 155 and I want to do it at 145.”

If no injuries occur, can Edgar get passed Mendes, and earn another shot at gold?