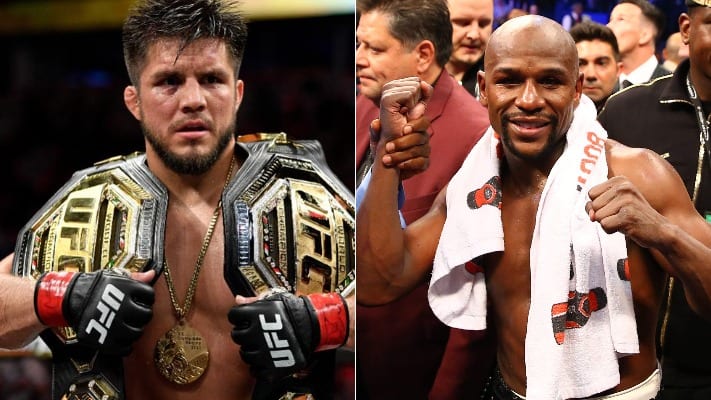 Henry Cejudo has been looking for a big fight to make his comeback, and now he is claiming to have found it.

The former UFC flyweight and bantamweight champion retired following a second round stoppage of Dominik Cruz in May 2020. Many questioned whether the retirement would stick, and Cejudo only added fuel to that fire by constantly calling out opponents over social media.

According to a Tweet from his account, it appears that Cejudo will indeed come out of retirement, only he won’t be returning to the octagon just yet.

“It’s going down!” Cejudo wrote. “The Triple C vs The Olympic bronze medalist @floydmaywether #staytune”. He also included a doctored photo of him facing off against Floyd Mayweather.

The announcement comes after UFC president Dana White was seen visiting Mayweather’s home in Las Vegas earlier this week. Mayweather was meeting with RIZIN FF President Nobuyuki Sakakibara, presumably scheduling another collaboration after their ‘Mega 2021‘ event fell through in February. The pair had previously worked together when Mayweather took on RIZIN and kickboxing star Tenshin Nasukawa in an exhibition match, which he won in the first round.

White’s appearance at the meeting apparently came as a surprise to Sakakibara, as it was the first time the former PRIDE FC head had seen the UFC boss in 15 years.

A move to the boxing ring for Cejudo shouldn’t come as a surprise. While he has called for fights against UFC champions Alexander Volkanovski and Aljamain Sterling, he has also tried to get the attention of rising boxing star Ryan Garcia.

As for Mayweather, he was expected to face YouTube sensation Logan Paul in an exhibition match in February, but that fight fell through. If the fight against Cejudo does come to fruition, it will be Mayweather’s first since the aforementioned bout against Nasukawa on New Year’s Eve 2018. Prior to that, he ran his professional record to 50-0 with a win over Conor McGregor, so another fight against an MMA star isn’t far-fetched.

Only time will tell if White was able to throw Cejudo’s name into the mix in his meeting, or if this is just another patented Henry Cejudo troll-job. If the fight is made official, it will be interesting to see if it will be an official boxing match, or another exhibition with special rules applied.

Do you think we will see Henry Cejudo face Floyd Mayweather?