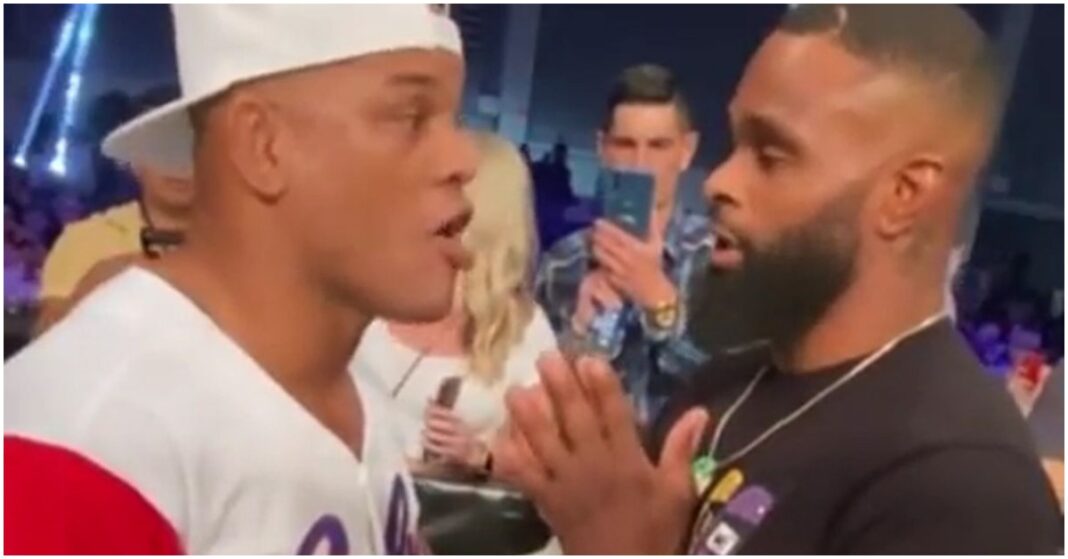 Hector Lombard has renewed his calls for a fight with Tyron Woodley less than a week on from ‘The Chosen One’ getting viciously knocked out by Jake Paul.

Lombard and Woodley previously had a run-in at Bare Knuckle Fighting Championship 19 back in July. The former Bellator middleweight champion accused Woodley of trying to steal his side chick and things got pretty heated.

Hector Lombard Is Still Salty About His Side Chick

Several months on from their run-in Lombard is still holding a grudge against ‘T-Wood’ and would love nothing more than to settle their beef in the BKFC boxing ring.

“I’ve always been interested to fight that fake f*ck,” Lombard told MMA Junkie. “I told you guys a long time ago, he’s a fake f*ck. He tried to pick up other people’s girls – not only mine, any girl that moved around, he tried to pick her up. Like, he feels that he deserves everything, and listen, it’s not about the girl because everybody, you know, when I made a post, everybody’s thinking about that I have feelings for the girl. No, I have feelings for the action of this clown that you think is your friend. You think like he can be your buddy, and here he is trying to get a hold of the girl.

“I think we need to get that fight out of the way, and I’m not going to let go until I get that fight,” Lombard added. “His punk ass needs to get beat up by me, and then I would be a happy man.”

Lombard claims it’s a fight he has been chasing for some time having previously begged the UFC matchmakers to book him against Woodley.

“I even went and I was begging Dana White first, and then I went directly and I begged Lorenzo to get me a fight, and Lorenzo told me like, ‘Oh, let’s see what’s going to happen,’” Lombard said. “But I went to beg Lorenzo. ‘Lorenzo, get me that fight!’”

Do you want to see Hector Lombard vs. Tyron Woodley under the BKFC banner?