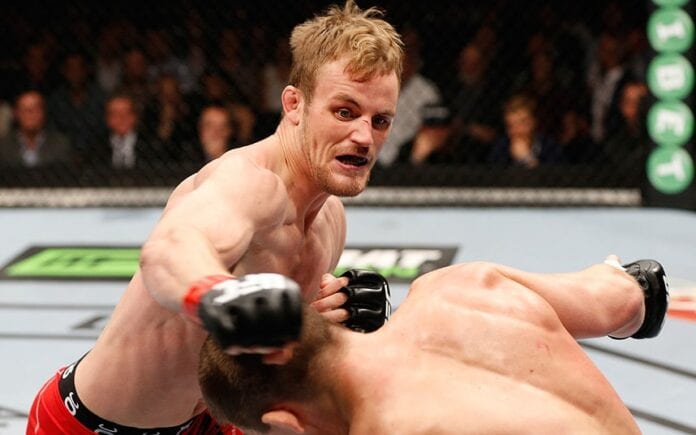 The bout will be ‘Gunni’s’ first bout fighting in the United States, as he was previously one of the main stars of the UFC’s expansion into Europe over the past few years, joining Swedish star Alexander Gustafsson and famed Irish featherweight and teammate Conor McGregor.

Prior to his loss to Story, Nelson had won all four of his UFC bouts over Zak Cummings, Omari Akhmedov, Jorge Santiago, and DeMarques Johnson, including three submissions.

Hathaway most recently lost his first bout by stoppage when Dong Hyun Kim hit him with a “Knockout of the Year” candidate spinning back elbow at The Ultimate Fighter (TUF) China Finale in March of 2014. Before that, “The Hitman” had won four straight decisions and seven of his nine fights in the UFC, with his only other loss coming to Mike Pyle at UFC 120 back in 2010.

But he’s only fought four times since March 2011, and nagging injuries have kept him out of the Octagon or long stretches of time. He’ll return to no easy task in the touted No. 14-ranked Nelson.

Between them, they boast 30 MMA victories compared to only three losses.

With the addition of the top-level welterweight bout, UFC 189, which features arguably the biggest bout of the year (and possibly ever) in Jose Aldo vs. Conor McGregor, is quickly beginning to rival May 23’s UFC 187 as the most stacked card of the year.

Who is your pick to come out on top?