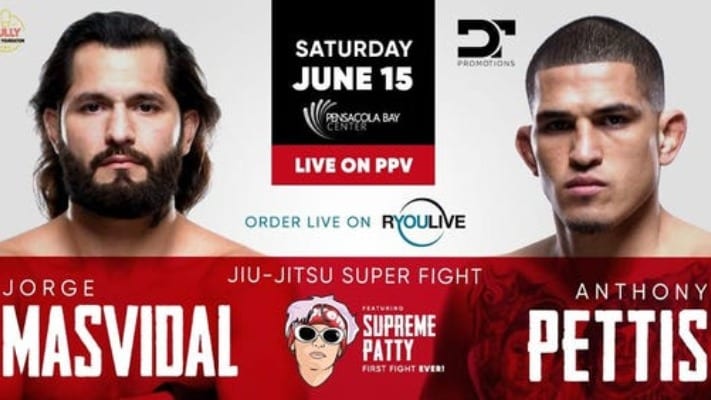 However, combat sports fans weren’t left completely high and dry, as Bellator 222 took place this past Friday night, while Tyson Fury returned to glory with a nasty second-round TKO win in Las Vegas last night. Three UFC stars were in combat sports action last night as well, but it wasn’t inside the Octagon.

UFC fighters Jorge Masvidal, Anthony “Showtime” Pettis, and Yoel Romero all took part in the Dean Toole Promotions charity event, which streamed live on Internet pay-per-view (PPV) via Ryoulive. Pettis and Masvidal competed in a jiu-jitsu bout against one another. The grappling affair was relatively uneventful for the most part. Pettis threw up several jumping submission attempts, but fell hard to the canvas unsuccessfully each time. Masvidal did manage to take Pettis’ back at one point, but couldn’t get a submission.

Their grappling bout ended in a Draw after 10 minutes. Romero had a much different experience. He faced heavyweight Chris Barnett in a grappling contest, submitting Barnett with a kimura after four minutes on the mat. It’s surprising that the UFC allowed the three to compete given they all have fights coming up.

Pettis will face Nate Diaz in the co-main event of the UFC 241 PPV in August. Masvidal is scheduled to face Ben Askren at UFC 239 next month on one of the most stacked cards of the year. And finally, Romero will be fighting Paulo Costa at UFC 241 as well.