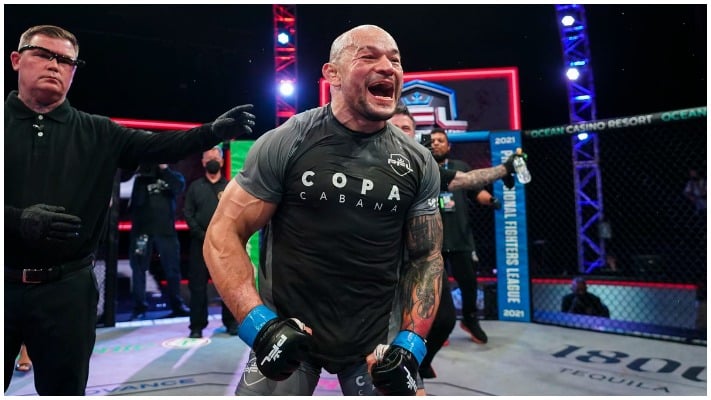 Even Gleison Tibau was surprised to hear himself announced the winner when he fought Rory MacDonald in the PFL 5 main event on Thursday evening.

MacDonald appeared to have easily done enough to take home the judge’s decision after three rounds against Tibau. However, the former Bellator to champion, Tibau and the fans watching around the world got a shock when he was awarded a split decision win.

Speaking at the PFL 5 post-fight press conference, Tibau heaped praise on his opponent and admitted his surprise at emerging victorious from the bout.

“Rory is a legend, he’s tough, a complete fighter,” Tibau said. “He has good wrestling, striking and grappling. It’s not an easy fight. I’m very happy because I didn’t fight for a long time. My first fight here at the PFL was Zeferino. A tough guy, Brazilian too. It had been a long time since I competed. I wasted time. Today, I’m more comfortable in the cage. I got nervous. The fight was tough. Every fighter I know, when a tough fight goes to the decision, gets nervous. I do not know. It was a big surprise!” (Transcribed by AG Fight)

‘The Red King’ reacted angrily to the decision. MacDonald told media members that an investigation should be launched after he was the victim of a “clear robbery.”

“I’m very disappointed,” MacDonald said. “I believe and everyone I talked to, and everyone online, scored the fight for me. Even three rounds to zero, so I think it was a clear robbery. I thought I was dominant in this fight. It was a hard fight. Gleison brought it, and respect to him, but I believe that I clearly won that fight and I think that this should be looked into.”

How did you score the PFL 5 main event between Gleison Tibau and Rory MacDonald?