Former professional mixed martial artist, Gina Carano has released a statement amid her recent firing from Disney series, The Mandalorian — following a string of recent inflammatory posts on her social media platforms.

Carano, who was handed her walking papers by Disney and sacked from her role in their flagship series, The Mandalorian drew major criticism after she shared a post on her official Instagram account, comparing the treatment of conservatives in the United States to that of the treatment and oppression of the Jewish community in Nazi Germany.

In an interview with Deadline in the twenty-four hours following her firing from Disney and the Star Wars series, Carano announced she was taking on another film project — in tandem with the website, The Daily Wire.A statement provided by Carano details how her voice is now “freer” than ever before, and how the “totalitarian mob” cannot “cancel us if we don’t let them.“

“The Daily Wire is helping make one of my dreams — to develop and produce my own film — come true. I cried out and my prayer was answered,” Carano explained. “I am sending out a direct message of hope to everyone living in fear of cancellation by the totalitarian mob. I have only just begun using my voice which is now freer than ever before, and I hope it inspires others to do the same. They can’t cancel us if we don’t let them.“

The Daily Wire released their own statement in tow with Carano’s — detailing how they “could not be more excited” to be working with the Dallas, Texas native and how Disney and Lucasfilm, “dumped” the 38-year-old.

“We could not be more excited to be working with Gina Carano, an incredible talent dumped by Disney and Lucasfilm for offending the authoritarian Holloway Left,” The Dail Wire’s co-founder, Ben Shapiro said to Deadline. “This is what Daily Wire exists to do: provide an alternative not just for consumers, but for creators who refuse to bow to the mob.“

“We’re eager to bring Gina’s talent to Americans who love her, and we’re just as eager to show Hollywood that if they want to keep cancelling those who think differently, they’ll just be helping us build the X-wing that takes down their Death Star.“

As a professional mixed martial artist, Carano amassed a 7-1 record and is regarded as a pioneer for the sport in North America. Calling time on her career back in August of 2009, Carano suffered a first-round knockout loss to current Bellator MMA featherweight champion, Cris Cyborg in the inaugural Strikeforce featherweight title fight. 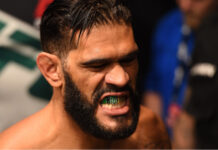 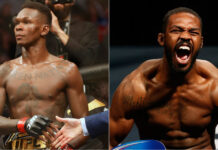 Israel Adesanya Takes Shots At Jon Jones Ahead Of UFC 276