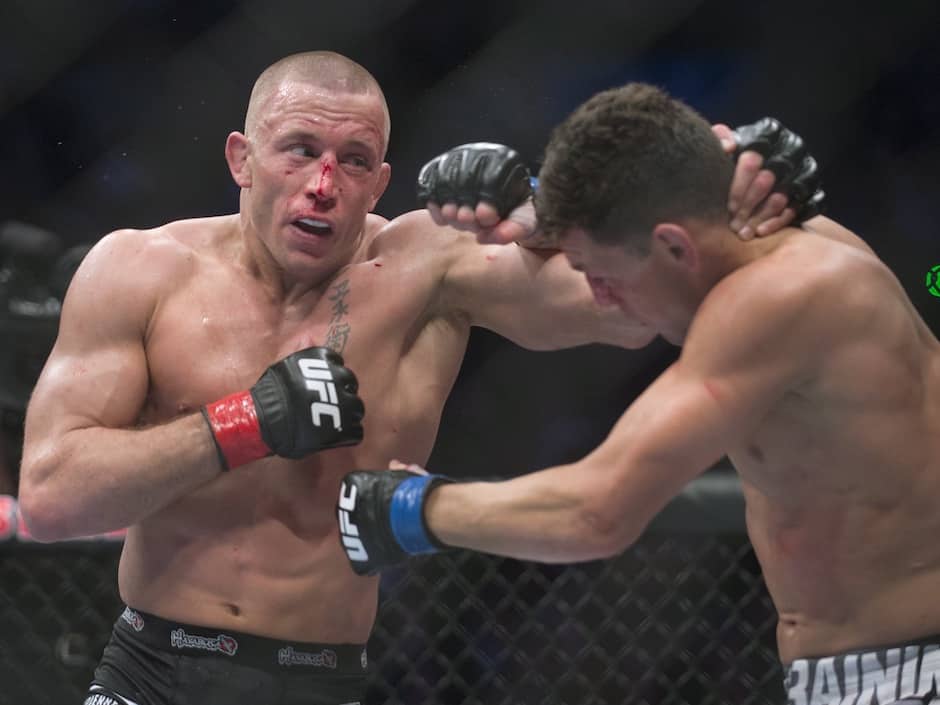 Will we ever see Georges St-Pierre vs Rory MacDonald? I get the sense that “Ares” is getting a bit tired of talking about fighting GSP….

Top welterweight contender Rory MacDonald finally cemented his status as the next challenger to the 170-pound strap at UFC Fight Night Halifax. “”Ares” put a thrashing on former Strikeforce champion Tarec Saffiedine in front of his home crowd in Canada, and was soon after promised the winner of Johny Hendricks vs Robbie Lawler at UFC 181.

MacDonald seemed to linger around the top end of the crowded division while his training partner Georges St-Pierre dominated play. Now that GSP has gone and “Ares” is next i line for the shot, it looks like the old GSP vs MacDonald questions are surfacing again. The “Canadian Psycho” is not really too pleased about that fact either. Check out what MacDonald told FOX Sports when asked if he would fight “Rush” once (if) he becomes the champ:

“It’s unnecessary. We’ve answered it so many times and it’s not going to change. I would assume so,” MacDonald said when asked if he thinks St-Pierre will come back. “It doesn’t mean he has to fight for the championship. He would respect my position if I was holding the belt.” “I don’t mind about the questions being compared to him or not,” MacDonald said. “I don’t like the questions about fighting. I find that somewhat stressful and an unnecessary pressure that I constantly have to answer.”

It seems that even now, as he stands on the brink of UFC glory, the young Canadian MacDonald still doesn’t like to stir the pot. Never really known for trash talking towards anybody, the last person that “Ares” would disrespect is his long time training partner GSP. All considered though, there may come a time in the future that this alliance with St-Pierre causes some headaches; for example, if GSP returns and doesn’t want to fight for the title, how will that impact the rankings and contenders in the division?

You could argue that “Rush” would re-enter the 170-pound rankings as the number one contender right away, so does he plan on just taking ‘exhibition’ style fights? The truth is that MacDonald will keep fielding these questions as long as he is a top contender, and they will become far more pertinent should he win the belt and/or St-Pierre returns.

If, by chance, the two head the division by mid-2015, do you think the UFC will attempt to make Georges St-Pierre vs Rory MacDonald? Is there any amount of money that is worth fighting a friend for?