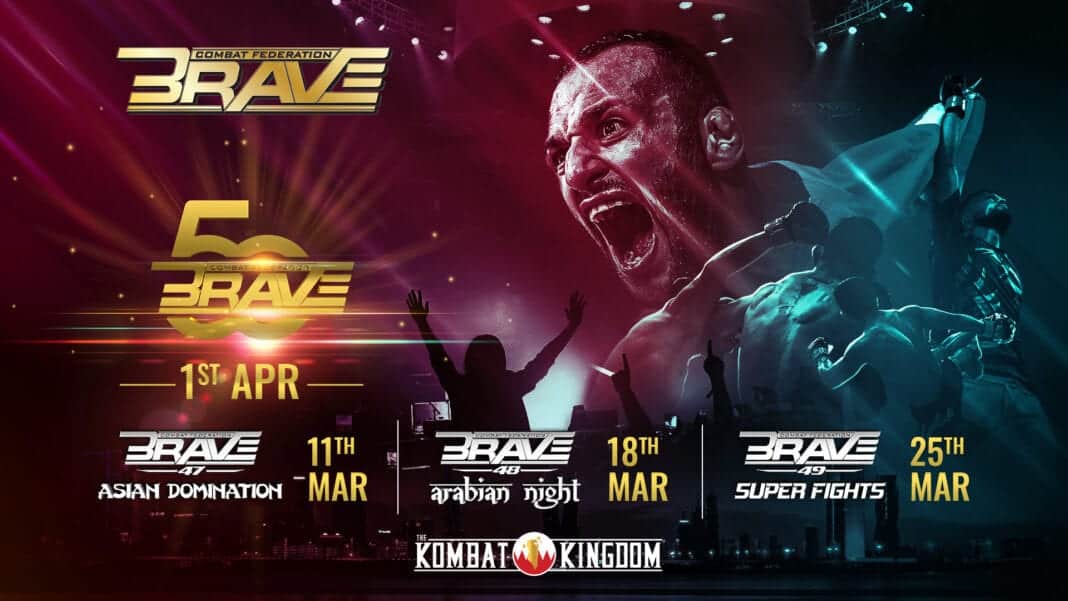 BRAVE CF has announced the full card for BRAVE CF 47: Asian Domination. The nine-bout card is the first of the four events the Bahrain-based promotion has scheduled for its Kombat Kingdom series, starting March 11 with BRAVE CF 47 and ending April 1 with BRAVE CF 50.

Headlining the show will be a pivotal lightweight clash between the Phillipines’ and former UFC fighter Rolando Dy and Kyrgyzstan’s Abdisalam Kubanychbek. The winner of this bout will earn himself a shot against reigning lightweight champion Amin Ayoub.

The co-main event will see two of the promotion’s top featherweight fighters squaring off. Husein Kadimagomaev, who trains alongside Khamzat Chimaev at Allstars Training Center in Sweden, is undefeated at 7-0, with all of his victories coming via stoppage. He will take on t another undefeated fighter in the form of South Korea’s Tae Kyun Kim. The winner of this bout will earn themselves a shot at the vacant BRAVE CF featherweight championship.

The card will also see the arrival of several new talents that the promotion is hoping will go on to cement themselves in their respective divisions. One name to pay attention to is Kazakhstan’s Asu Almabayev. The 27-year-old will enter the cage at BRAVE CF 47 on an eight-fight winning streak and a 12-2 record. A former M-1 Global Champion Almabayev will take on Kyrgyzstan’s Ryskulbek Ibraimov in a flyweight matchup. The BRAVE flyweight division is one of the promotions most competitive, and the addition of Almabayev will only add to its depth.

Here is the full line up for BRAVE CF 47: Asian Domination