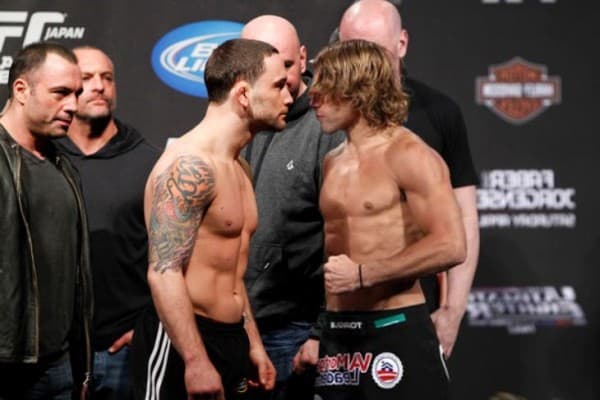 UFC Fight Night 65 will mark the promotion’s first trip to the Philippines, in the Country’s fighting capital of Manilla on May 16th, 2015, hosted by the 20,000-capacity SM Mall of Asia Arena. Who better to put on the card than former lightweight champion Frankie Edgar, and his super-exciting counterpart and former WEC (World Extreme Cagefighting) champion Urijah Faber.

The pairing has been talked about for a long time now, but it seems now that multiple sources close to the promotion have apparently confirmed the pairing. Frankie Edgar vs Urijah Faber might well be one of the most exciting match ups on paper, and will likely deliver a ‘fight of the night’ performance any day of the week.

Frankie Edgar vs Urijah Faber was close to being made back in 2014, with “The Answer” offering to go to a catchweight of 140 pounds and Faber stating that he would return to featherweight for the fight. It’s not yet known what weight the two will meet at , as Edgar is currently on a three-fight tear at featherweight, and “TCK” is riding two straight at bantamweight.

The bout is expected to be officially announced later today (Febraury 11th, 2015) so stay tuned for updates.

It looks like the fight is now official, check it out:

Sources close to the situation have also informed BloodyElbow.com that the headliner will be officially announced Thursday morning in Manila. More bouts are expected to be finalized and revealed in the coming days as well.

The bout was later official confirmed on tonight’s episode of UFC Tonight:

BREAKING: May 16th in Manilla, Philippines. Urijah Faber vs. Frankie Edgar at 145lbs!