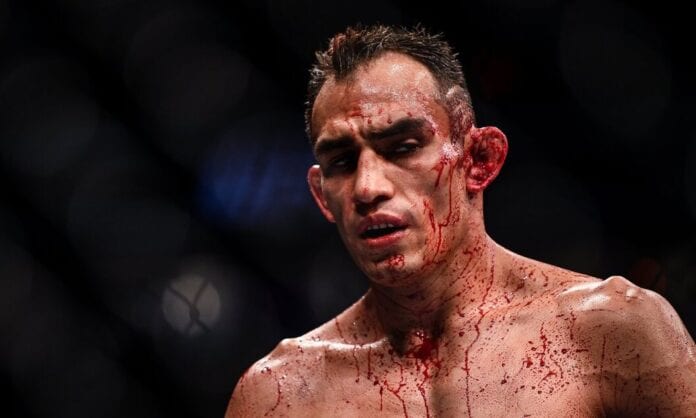 The UFC will not be finding Tony Ferguson a replacement opponent at UFC 254, they’ve instead just decided to pull him from the card entirely.

‘El Cucuy‘ was initially scheduled to face fellow former interim UFC Lightweight Champion Dustin Poirier, and the booking stayed together for a while there. The issues started when Poirier wanted more money, but he and the UFC couldn’t come to an agreement, and he removed himself from the fight considering.

After about a week of thinking we’d see Ferguson fight someone else on October 24, we’ve been told he won’t be fighting on the card after all.

“”I spoke with Dana White earlier and he confirmed that Tony Ferguson will no longer be competing at UFC 254.””

Tony Ferguson versus Dustin Poirier was going to be the co-main event, undoubtedly a No. 1 contender fight, and also the backup to the main event, should anything happen to either the interim or undisputed champion before the fight happens.

Now that ‘El Cucuy’ is pulled from the card, he won’t be eligible to serve as a backup. Instead, the UFC has announced that newly signed multiple-time Bellator Lightweight Champion Michael Chandler is going to be the backup.

Honestly, they already had a fight put together where one of them was serving as the potential backup, they should have booked Chandler against Ferguson. How insane would that have been? We wouldn’t even be upset that Ferguson wouldn’t be fighting Poirier anymore.

Nonetheless, we do have a new exciting talent added to the UFC’s lightweight division in Michael Chandler. He’s arguably Bellator’s most successful fighter they’ve ever had, the only two that’d rival that are Patricio Freire and Ben Askren.