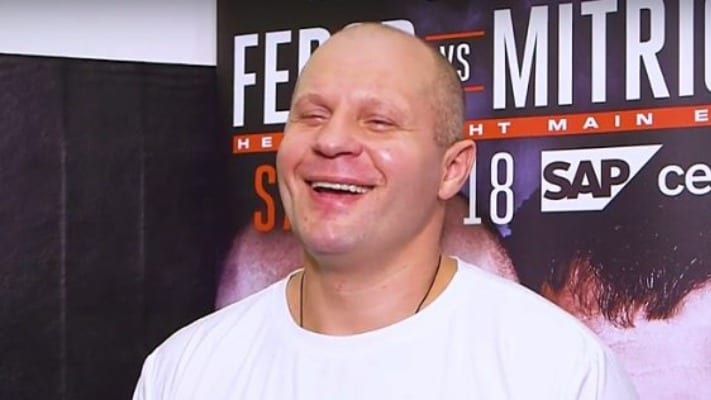 Fedor Emelianenko will make his long-awaited return to the cage this year, as Bellator welcomes the legend back at its first event on Russian soil.

Emelianenko has been away from the sport for almost two years. In his last appearance, Emelianenko knocked out Quentin “Rampage” Jackson in the first round of Bellator 237. He had been unable to regain the heavyweight title earlier in the year, losing the 2019 Heavyweight Grand Prix Championship to reigning heavyweight king Ryan Bader. There had been talks of a Fedor retirement tour. However, the pandemic struck, and plans for the tour never materialized.

The tour may not have happened, but Emelianenko will do something he has not done thus far in his illustrious career. On October 23, 2021, at VTB Arena in Moscow, Russia, Fedor Emelianenko will compete for Bellator in his home country for the first time. When asked how important this was to him, Emelianenko was all smiles.

“Of course it was very important to me,” said Emelianenko.

“I like to represent my country and it [is] very exciting for the Russian fans, because [it will be] the first time that Bellator [comes] to Russia. All the fans [will] get to see their favorite fighters live for the first time.”

As exciting as the event will be for fans, there are still significant questions that must be answered. Bellator has not revealed any other fights on the card. They also have not announced who will stand across from Emelianenko in the cage. For his part, Emelianenko is not interested in calling out any one fighter.

“Oh, yeah. You know, I got a lot of names in my head, but it’s up to Bellator. But for now, I’m just figuring through names. But again, it is up to Bellator or the people.”

As we await confirmation of his opponent, one thing is sure. We are all happy to see Fedor Emelianenko back in the cage.

Who would you like to see Fedor Emelianenko face in Bellator’s first Russian event?