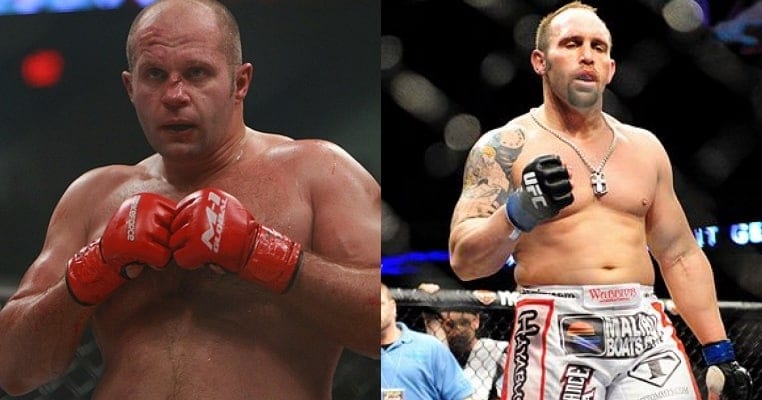 Former UFC interim heavyweight champion Shane Carwin recently announced that at 41 years of age he would be coming out of retirement and making his return under the Rizin banner in the promotion’s open weight gran prix tournament. The heavy-handed slugger also said that he was offered a bout against legendary all time heavyweight great Fedor Emelianenko, although “The Last Emperor” recently declined that report via his official Instagram account:

“We were not and are not conducting negotiations for a fight with the company Rizin,” he wrote via Karim Zidan of Bloody Elbow. “Therefore, the information regarding Shane Carwin’s acceptance to meet me in the ring is surprising for me. No proposals from the Japanese promotion arrived to me. In the near future we will announce the date of my fight from official sources.”

Emelianenko fought for Rizin in his return bout on Dec. 31, 2015, scoring a dominant stoppage victory over the rather unknown Jaideep Singh. He most recently scored a highly controversial decision victory over former UFC veteran Fabio Maldonado at EFN 50 last June in Russia. As far as his next fight goes, Emelianenko has been rumored to be in talks with Bellator for a potential fight with former UFC heavyweight Matt Mitrione this spring, but the Russian said that nothing has been signed just yet:

“We are now negotiating my next fight, but the contract is not signed with any organization. Before the official announcement, all information about the negotiations are confidential and neither party can not disclose it. As long as I’ve been training as usual, has not yet started to prepare the specific opponent. Today, many people use the lack of information about my next fight for their own purposes.”

Who would you like to see “The Last Emperor” meet next?