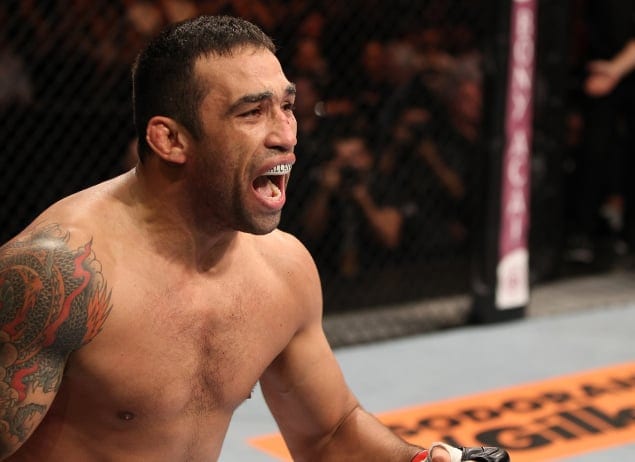 It looks like Colby Covington wasn’t kidding when he said he planned to press charges on UFC heavyweight Fabricio Werdum for (allegedly) throwing a boomerang at him in Sydney, Australia, yesterday.

News arrived this evening from The New South Wales police force’s official website (via MMA Junkie) that the former UFC heavyweight champ would face court for the assault:

A man will face court after he allegedly assaulted a man with a boomerang yesterday.

About 1.30pm (Thursday 16 November 2017), a 40-year-old man and a 29-year-old man became involved in an altercation outside a hotel on George Street, Sydney.

The incident escalated when the 40-year-old man allegedly threw a bag containing the boomerang at the other man, which hit him in the neck.

Officers from Sydney City Local Area Command were later alerted to the incident and commenced investigations.

Following inquiries, a 40-year-old man was issued with a Field Court Attendance Notice for common assault.

He is expected to appear at Downing Centre Local Court on Wednesday 13 December 2017.

Werdum’s possible punishment for the incident, which began when Covington allegedly starting mouthing off by repeating his oft-cited slurs against Brazilians and kicked Werdum in the leg, is currently unknown. UFC featherweight Dan Hooker caught the incident on tape on his phone and posted it on Twitter.

Covington also began filming the incident on his phone towards the end of the snafu, where he was heard calling Brazilians “filthy” animals and hurling a homophobic slur on his own video.

But with this incident now involving an actual arrest following his highly-publicized UFC 216 media lunch standoff with Tony Ferguson where he threw several homophobic slurs of his own (for which he has yet to be punished), Werdum certainly isn’t doing himself  – or the UFC – any favors.

The promotion has stated they are looking into the incident to determine if violated the UFC Athlete Code of Conduct, and with charges now filed, there’s a good chance that it did.