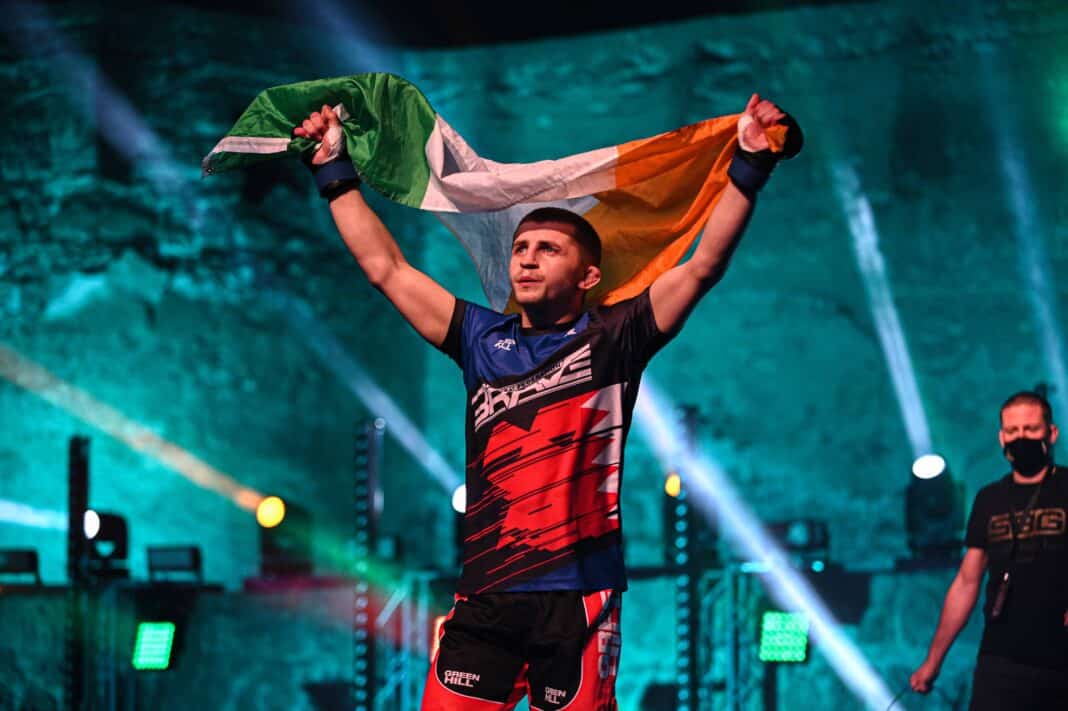 Ireland’s Blaine O’Driscoll is confident he has all the tools needed to hand rising star Muhammad Mokaev the first loss of his professional career. The two will meet in the co-main event of BRAVE CF 54, taking place in Konin, Poland, on Sat. September 25.

The 29-year-old Dublin-based fighter is known for his uncompromising style, and his 59kg catchweight fight with Mokaev is shaping up to be one of the most anticipated bouts of the night.

“I kind of felt like this was a fight that was going to happen even before I was with BRAVE,I always felt like we were going to fight for some reason every time I watched him,” O’Driscoll says, speaking to LowkickMMA.

“I think I am a very tough fight for him [Mokaev]. Stylistically it’s a very hard style for him, and fair play for him taking it, but I think it was a mistake taking it. I think all the pressure is on him for it. He is the one with the unbeaten record. He’s the star. There is no pressure on me. This is a win-win for me. “

O’Driscoll turned professional in 2014 and has racked up a record of 9-4. He has competed for the likes of BMMA and Bellator and knows victory over Mokaev, will see his name generate plenty of headlines

” A win for me against Mokaev is like five wins against anyone else. A win here is huge for me,” he explains.

Mokaev only turned professional in 2020 and so far has lived up to his reputation as one of MMA’s most promising talents. The 21-year has quickly racked up a 5-0, 1 NC, professional record and has looked impressive each time he has stepped foot inside the cage. However, this weekend Mokaev will face an opponent a level above what he has met before.

O’Driscoll, who trains out of SBG Ireland, has benefited from an extended fight camp after a proposed bout at BRAVE CF 53 in Kazakhstan fell through due to possible travel complications. It means fans will get the chance to see him in peak form for what will be one of the biggest fights of his career.

“It’s been great, ” he says, talking about the current environment at SBG.”

“John [Kavanagh]has been back now since Conor’s fight. He has been flat out in the gym. When John comes back, I don’t know what it is when John is watching everyone is on a different level; it is a lot better when he is there.

“A lot of people are fighting in different places when everyone is in a camp together. You all share the burden together. It’s nice that way.”

This bout will be O’Driscoll’s second under the BRAVE CF banner; his first was a short notice affair at BRAVE CF 49 when he fought Jose Torre after Torres’ original opponent pulled out.

After surviving an explosive start from O’Driscoll, Torres went on to earn a unanimous decision victory. However, O’Driscoll’s performance put the rest of the flyweight division on notice as well as catching the attention of BRAVE’s matchmakers, who have rewarded the Irishman with a marquee fight.

“I wanted to fight in BRAVE for a while because I feel that they have the best flyweight division,” O’Driscoll says.

“So when I saw the chance, I knew it was a risk-taking the fight on a couple of days notice and against a very tough opponent, but it was a risk that is paying off for me, “

Mokaev may receive the bulk of the attention in the build-up to this weekend’s fight, but when the dust settles in Poland, O’Driscoll is backing himself to be the one with his hand raised.

How do you think this fight goes down?