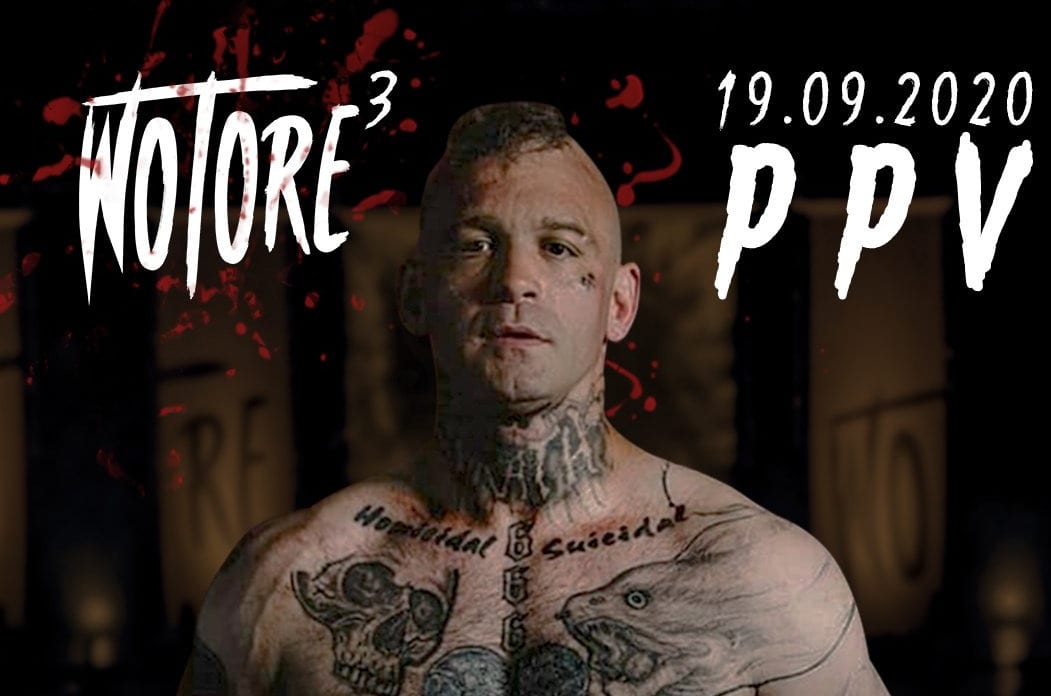 Eric ′Bloodaxe’ Olsen may not be a name known to casual fight fans, but the charismatic 38-year-old has built up a loyal following with his all-in philosophy when it comes to fighting.

Bare-knuckle boxing, boxing, MMA, Muay Thai, whatever the ruleset Olsen has likely fought under it. A veteran of over 87 amateur and pro fights, Olsen will be looking to stamp his mark on a new stage this weekend, when he competes in an eight-man tournament at Wotore 3 on Saturday, September 19.

The basic ruleset is simple. No rounds, bare-knuckle, openweight, and almost all strikes—including headbutts — are legal.  It appears to be an environment a fighter like Olsen will thrive in.

“For me, it’s a fight, and anything can happen,” Olsen said, speaking from Poland to LowkickMMA.

“Obviously, I am not fighting people who don’t know how to fight, but I think it’s like when amateur kickboxers have a kickboxing fight, and they finally take the shinpads off, all of a sudden you don’t see so many people kicking the legs. They are so concerned about shin on shin.

“So, I think that type of stuff people when they get in there, and the fists are flying, and they realize there are no gloves it can play with their heads a little bit, but for me, it’s whatever, but I  have been fighting bare-knuckle for four and half years.”

Olsen’s experience in the bare-knuckle scene has taught him the correct way to throw his punches without damaging his hands. The knowledge gained over the years is likely to prove invaluable, especially as he looks set to be the most experienced bare-knuckle fighter out of the eight combatants involved.

“There are certain ways I like to throw my hooks, and I angle my knuckles, I turn my knuckles down like I got a blade attached to them. That stuff has come from years of doing it, whereas were I to throw a hook-like I had boxing gloves on, I would probably break my hand,” Olsen explained.

“To me, it’s just the angle; you punch with boxing or MMA gloves, I am trying to punch through you; with no gloves on, I am just trying to cut you.”

However, talking to Olsen, it becomes clear that it’s not his fists that should be causing his opponents the most worry but his head. While headbutts have been legal since Wotore’s first event, as Olsen explains, making headbutts legal doesn’t automatically mean fighters know how to get the most out of them.

“I think fans want to see it, and it adds to the allure [ of the event], but nobody has seen anybody actually get demolished with actual headbutts yet,” he said.

“If I catch you with a headbutt once or twice, bones are breaking on you, and that’s just what it is, and if you catch me with one, that’s cool, you might bloody my nose, but I am going to split you down the middle.

“I think a lot of people go into it thinking we can headbutt, it’s bare-knuckle but then when it starts happening, they don’t know what to do. They just start to grab. I know what I am doing, and I know what my fucking history reads like when it comes to inflicting damage when it comes to that shit. I am not going to be shy about it. When I get into that range, I’m trying to devastate.”

Olsen arrived in Poland yesterday in fighting condition after spending the past few weeks training in Germany alongside top-level UFC and KSW fighters.  The American is known for his striking but spent his time in Germany focusing on his ground game. Since arriving in Poland, he has been impressed with what he has seen from one of the newest promotions in combat sports.

“They have been very cool, and as far as the whole promotion is set up, I like the way they are doing it. ” Olsen said.

“I like the circle with the smoke. It looks like something you would see in a Soulcalibur video game.”

Olsen is not looking past this weekend’s event, but after years traveling and fighting across the world, he is all too aware of how opportunities create further opportunities.

“I look at fighting like it opens one door, and it opens another door. I win this tournament; I can do another tournament or a superfight.  The money is good, three fights in one night, for USD$12,913. I used to do two fights in one day in Nassau County Correctional facility and get sixty days keep-lock. So it’s a big fucking increase for me.”

Olsen spent several years in prison in his early twenties, but he has used fighting to channel his energies into creating something positive.

“It helps me focus my energy into things. I don’t consider myself a violent person; my idea of a fun weekend is listening to music and reading a book, ” Olsen explained.

“I need this to steady my mind, to have something to look forward to. This is my lineage I am leaving behind; when I am dead and gone, people will remember these fights.”

Olsen still recalls when a parole board mocked his response when, after being asked what he wanted to do after prison, he said he wanted to become a professional fighter.

“They mocked me. They wrote to the court, ‘claims he will be a professional MMA fighter but has no experience, we recommend he be denied parole. Further recommendations that upon his release, he should be supervised because he fits the criteria of someone who will reoffend and be back and be reincarcerated within six months.’

“I picture them sitting in that room, typing that fucking report, this guy thinks he is going to a superstar, fuck him he is going to be back here paying our kids college tuitions,” Olsen said.

“The fact that they did that, that really set in motion in my head ‘fuck these motherfuckers I am going to get out there and do that shit’.”

The fact that Olsen has traveled the world and done what he has done is a testament to his strength of character. This Saturday in a studio in Poland, ‘Bloodaxe’ will add a new chapter to his story, one that is likely to feature a few cuts, a few bruises, and a whole lot of headbutts.

WOTORE 3 will be available via PPV for only $5 USD, and fans wanting to check out this weekend’s event can click on the link below.