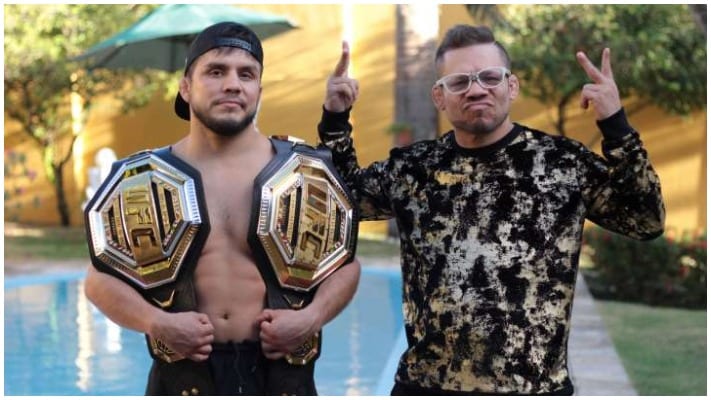 UFC bantamweight champion Henry Cejudo shocked the MMA world by announcing he would be retiring from the sport after his latest win at UFC 249. Cejudo met former 135lb king Dominick Cruiz in the co-main event on May 9. ‘Triple C’ dropped and stopped Cruz inside two rounds to retain his title and move on to bigger things.

In his post-fight speech, Cejudo made the surprise announcement he’d be retiring from the sport at just 33 years old and clearly in his fighting prime. This retirement was not part of the plan according to Cejudo’s coach Eric Albarracin who told BJPenn.com the team had been discussing a run at featherweight prior to UFC 249, he said.

“We were really surprised. On the day of the fight, we were talking about who he was going to call out after the fight. We talked about Conor McGregor, Alexander Volkanovski, and Aldo, and we thought let’s call them all out. The plan was to change Henry’s nickname to C4 and Henry said stop right there I’m done. If he’s happy, I’m happy.”

The retirement of Cejudo is not being taken seriously by a lot of fans who feel he is simply trying to negotiate a better contract with the UFC. His manager Ali Abdelaziz has added to this narrative by claiming Cejudo will return to fighting this summer. Albarracin while not totally ruling out a Cejudo return believes we’ll most likely never see him fight again, he explained.

“I would never say never but it is permanent. When Henry won the Olympics in 2008 everyone thought he would go two or three more and he said I’m done the next day. We’ve seen this before. He came back in 2012 but his heart wasn’t in it. He knows you can’t take two or three years off from this game and come back at the top. Cruz did it, but it’s really hard so I think he is done.”

Albarracin also believes even if Cejudo doesn’t fight ever again he’s already cemented his legacy as the greatest combat athlete of all time.

“Triple C is the GOAT. His first round at the Olympics was against a former world champion. No one has done what he has done. There will never be another Triple C and he is the greatest of all-time due to the quality of opponents he has beaten. He has the highest quality of opponent the next was Jon Jones,” he said. “He beat Demetrious Johnson, he beat TJ Dillashaw the greatest bantamweight if you don’t think he was the 135-pound GOAT the other person was Dominick Cruz and Henry took him out. Then you throw in Marlon Moraes. There are no comparisons. Henry is the greatest combat athlete of all-time.”

Do you believe Eric Albarracin? Is this Henry Cejudo retirement real?