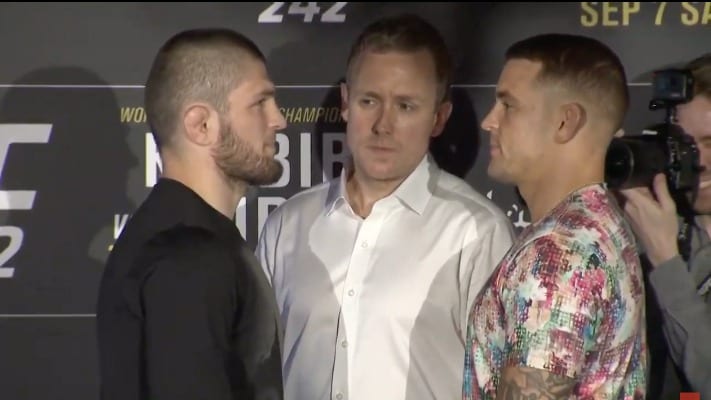 On September 7, Dustin Poirier will attempt to do what no other man has been able to.

“The Diamond” will step into the Octagon with Khabib Nurmagomedov in the UFC 242 pay-per-view (PPV) main event. Khabib is currently undefeated in his mixed martial arts (MMA) career with a record of 27-0. He has proven to possess some of the most dominant grappling ability MMA has ever seen.

Now, the lightweight champion will unify his title with interim champion Poirier, who tells MMA Junkie that he knows he’s going to finish “The Eagle.” Whether it’s by knockout or submission, Poirier will get his hand raised after a stoppage win.

“I keep going back and forth,” Poirier said. “I feel like I can submit Khabib, but feel like I’m going to stop him. I don’t know how it’s going to happen, but I’m either going to knock him out or I’m going to submit him. I’m going to finish Khabib Nurmagomedov.”

Don’t mistake Poirier’s confidence for cockiness. “The Diamond” realizes how much of a threat Nurmagomedov is, especially on the ground. If Poirier allows Nurmagomedov to get on top of him, he knows he’s in for a rough night.

“Of course, it’s a huge danger,” Poirier said. “I don’t want this guy to get on top of me and start pulling away with rounds. We only have five of them. If you let a guy lay on you for three, you need a finish. That’s not what I’m trying to do in there.”

“I’m not worried about his takedowns so much. I need to hurt this guy. That’s a huge part of this training camp. Putting myself in good positions to win the rounds and win the fight. Staying off the fence. Getting up off the ground. But, at the same time, I need to do what I do.”

Poirier has an opportunity to make history next month. To defeat an undefeated champion in enemy territory from Abu Dhabi. At the end of the day, that’s what it’s all about for the American Top Team (ATT) product.

“I have the opportunity to make history and do something that’s never been done,” Poirier said. “I’m embracing that … I’m just excited that I put myself in this position and that I have an opportunity to show the world how great I am on the biggest scale possible and unify these belts. Make history – that’s what this is about.”

What do you think about Poirier vowing to finish Khabib in Abu Dhabi?