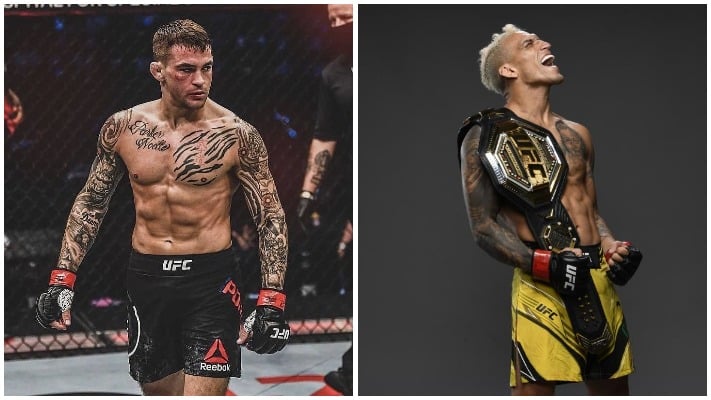 Dustin Poirier has taken to social media and seemingly confirmed that he has signed to fight Charles Oliveira for the lightweight title at UFC 269 on December 11.

ESPN reporter Brett Okamoto later confirmed that the tweet was in reference to ‘The Diamond’ reaching an agreement with the UFC for a fight with ‘Do Bronx’ later this year.

Poirier appeared to have cemented himself as Oliveira’s first title defence when he picked up a second successive win over Conor McGregor at UFC 264 in July. However, since then the Lafayette, Louisiana native has been angling for a money fight with Nate Diaz. It now appears that he will get his second shot at the true lightweight title when he takes on Oliveira on December 11.

The Brazilian submission specialist won eight straight fights to earn a shot at the title recently vacated by the now-retired former champion, Khabib Nuramgomedov. Oliveira sensationally made it nine in a row when he faced off against Michael Chandler at UFC 262. ‘Do Bronx’ survived a very tough first frame before blitzing the former Bellator champion early in round two with a flurry of pinpoint strikes to get the KO win.

Do you think Dustin Poirier will finally become champion at UFC 269?