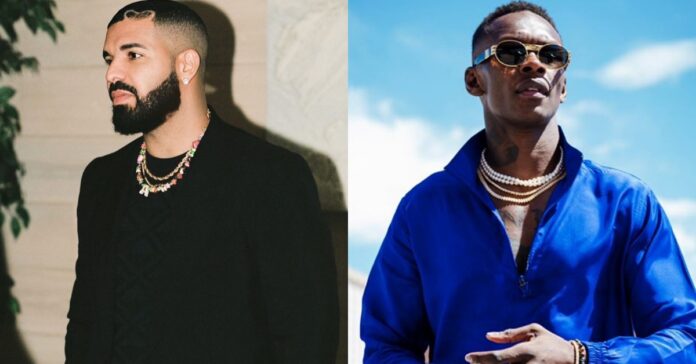 Rap star, Drake has revealed he has slapped a whopping $1,000,000 wager on UFC middleweight champion, Israel Adesanya to successfully defend his divisional title this weekend in the main event of UFC 276 – picking the Nigerian-Kiwi to score a triumph against Jared Cannonier.

Israel Adesanya, who headlines UFC 276 this weekend during International Fight Week, attempts to secure his fifth successful defense of the middleweight championship, taking on the #2 rated challenger, Cannonier.

Last time out, the City Kickboxing staple managed to hand former champion and two-time foe, Robert Whittaker a unanimous decision loss in the main event of UFC 271 in February.

On that same Toyota Center card, Cannonier eanred his premier title challenge under the promotion’s banner – knocking out common-opponent, Derek Brunson with a slew of brutal second round ground elbows.

Entering this weekend’s T-Mobile Arena showdown as a clear and distinct favorite, Adesanya spoke with the aforenoted rapper, Drake ahead of his fight with Cannonier – with the Canadian superstar revealing he has splashed a cool $1,000,000 bet on the former to defend his undisputed championship.

“I already know what time it is, you know, I put a light million up,” Drake said during a FaceTime call with Israel Adesanya. “The return on investment is a lot. I just wanna wish you luck and I love you, brother. You’re different, you’re a different guy, bro, I have a deep, deep, deep level of respect for you. … For sure, I gotta walk you out.”

“You know what’s crazy, I never walked anybody out before, I gotta walk you out,” Drake said. “We’ll figure something out. Good luck, brother – I’ll hit you up after the fight.”

Most notably in the past, Drake featured on the stage during the weigh-ins for UFC 229 in October 2018, accompanying former two-weight champion, Conor McGregor ahead of his title fight against Khabib Nurmagomedov.