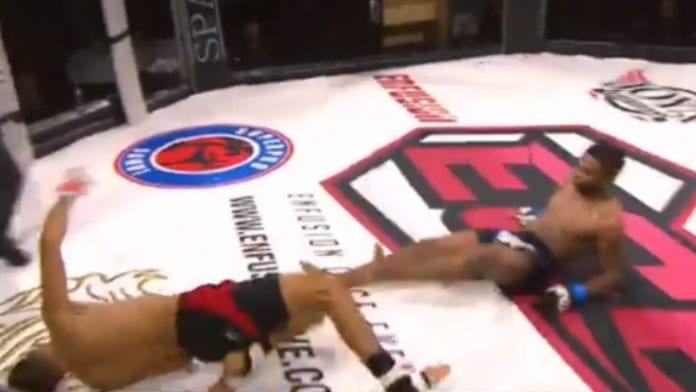 A rare double knockdown saw one man rise to his feet a claim a crazy KO win during Portugal’s ECE promotion on Enfusion TV.

The fight video has gone viral and you can see exactly why. (H/T MikeyThomasMMA via Twitter)

Eder Lopes and Diogo Neves are the fighters you can see in the clip. Both connected with a heavy left hook at exactly the same time. It appeared to be a double knockout as both fighters fell to the mat. However, it was Lopes who had the stronger chin and he despite wobbled rose to his feet to be declared the winner via KO.

Lopes is a 22-year-old kickboxing champion who appears to have massive future in the sport. He already holds a high-profile upset win over fight legend John Wayne Parr on a Bellator Kickboxing event last year.

The double knockdown might be the rarest event in mixed martial arts, though it has happened before. Most notably was when MMA legend Fedor Emelianenko and Matt Mitrione squared off at Bellator New York. Both men landed and fell simultaneously. Mitrione was able to recover quickly and finish the Russian via ground strikes.

No epic fight moment is complete without one of Robin Blacks breakdowns. He was quick to react to the viral video with a breakdown on his Instagram page.