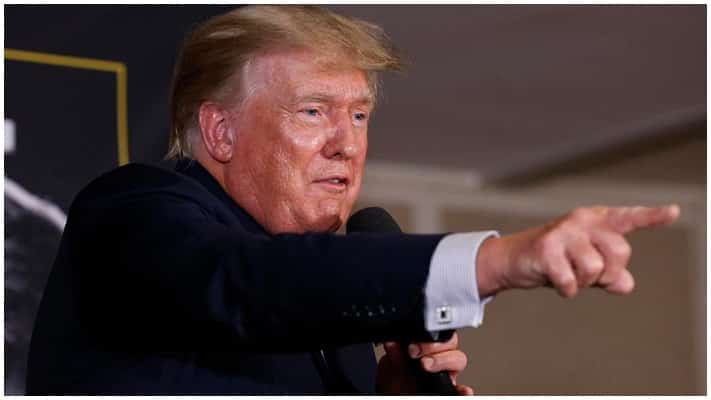 Donald Trump was full of praise for Vitor Belfort after his first-round TKO win over Evander Holyfield at Triller Fight Club Legends 2 on Saturday night.

The former US President was in the commentary booth with his son, Donald Trump Jr., Junior Dos Santos, and Jorge Masvidal at the Seminole Hard Rock Hotel & Casino in Hollywood, Florida.

After the main event concluded, Trump took his chance to congratulate Belfort.

“You are some fighter,” Trump said. “I have to tell you, you have a couple of friends between Jorge and Junior, and my son, my ‘junior,’ they said you’re going to do fantastically well…I said, ‘Well, but boxing’s not his thing.’ Junior said, ‘Yes it is, you just watch.’”

“You are a great patriot and we appreciate it,” Trump added when speaking to Belfort who recited the 45th American President’s tagline “Let’s make America great again.”

“Vitor, your stock was very high, but it’s even higher tonight because you beat somebody who is, I don’t know, I think probably one of the greatest of all time,” Trump continued. “There’s no question about Evander and we love Evander. I know Evander, and I’ve never seen that happen to Evander. I’ve been with Evander a long time and it’s just one of those things, you were really fantastic.” (Transcribed by MMA Junkie)

Belfort has now kickstarted his boxing career. ‘The Phenom’ and the Triller execs sent a call out to Jake Paul post-fight. The YouTuber has just picked up his fourth professional boxing win, beating Tyron Woodley over eight rounds. Paul has been open about his desire to fight a real boxer next, preferably Tommy Fury. Although, he could be swayed by the $30 million winner takes all offer to fight Belfort instead.

Who do you want to see Vitor Belfort fight next?