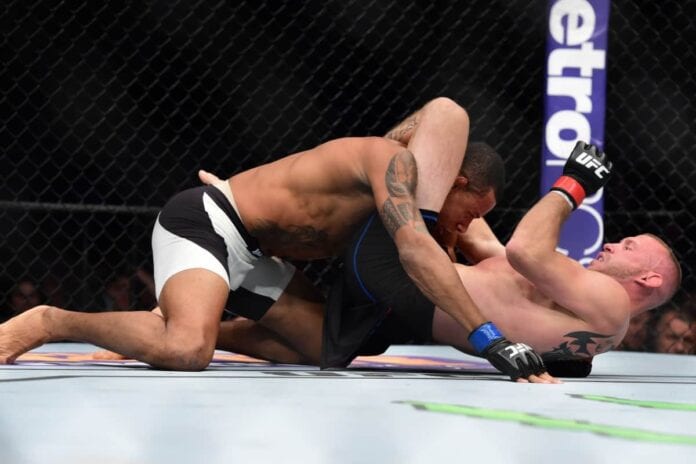 Former lightweight title competitor Donald ‘Cowboy’ Cerrone may have been facing a relatively inexperienced opponent when he fought fellow ‘Cowboy’ late replacement Alex Oliveira in the main event of tonight’s (Sunday, February 21, 2016) UFC Fight Night 83 from the CONSOL Energy Center in Pittsburgh, Pennsylvania, but that doesn’t mean he didn’t face some adversity.

That is, at first.

The aggressive Brazilian ‘Cowboy’ went for Cerrone’s perceived weak area early, blasting him with some knees to the body and some big punches. However, it was ultimately Cerrone’s experience that proved true, as he took advantage of a picturesque takedown to force Oliveira into the mistake of opening up his guard, which allowed Cerrone to mount him. From there, the fan favorite locked on a triangle choke that earned the immediate tap from the still-green Brazilian and a much-needed return to the win column at welterweight.