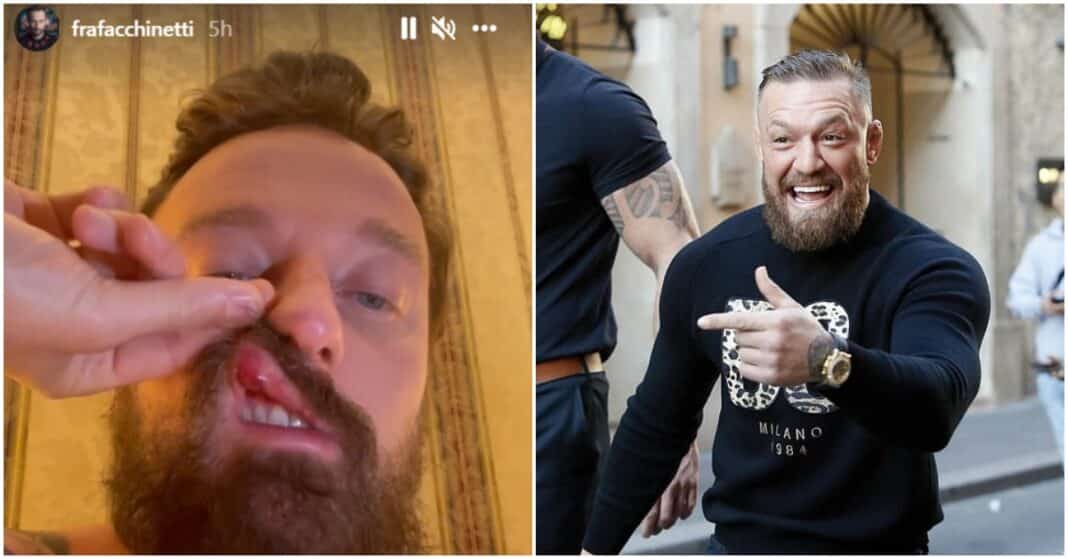 Italian DJ Francesco Facchinetti opened up about his incident with the ‘Notorious’ one.

Late Saturday night, it was reported that UFC superstar Conor McGregor had attacked another person outside of the octagon, this time an Italian DJ.

Facchinetti gave his first exclusive interview with The Daily Mail on Monday, explaining what happened and what led to the altercation, which led to him getting his nose broken.

“One minute, we were talking in a friendly manner, and the next, he just lashed out at me. We were having a drink together, and everything seemed fine when suddenly he changed. I was a few inches from him when he punched me full in the face with his right hand,” Facchinetti told The Daily Mail.

“I went flying backwards and crashed into a table.”

“I was stunned. There was a lot of blood, and my wife became hysterical and screaming. One of the bodyguards tried to calm her down, and two people immediately jumped on McGregor and dragged him away. I could not believe that he had hit me. I must admit I was worried about what he would do next, but he was quickly taken away. Everyone was very shocked and upset. No one could not believe what he had done. It was just so unfair and uncalled for,” Facchinetti said.

According to the Italian DJ, McGregor became hostile and violent after American actress Bella Thorne and her husband left the party. Thorne was in Rome because she was attending a movie premiere for the movie Time is Up.

“Bella said she had to get an early train to go to Milan for a premiere, and she needed to get some sleep. I said the party could continue and would stay with my wife. That’s when he flipped. He was completely out of control. He seemed like he wanted to kill me for absolutely no reason. Bella was stunned; she couldn’t believe what happened,” Facchinetti said.

The attack happened hours after McGregor and his partner, Dee Devlin, had their son baptized at the Vatican, which is why the couple was in Italy in the first place.

Prior to the attack, the Irish superstar was very talkative.

“McGregor was very talkative chatting about this and that for three hours, and the whole group was enjoying each other’s company. We talked about Rome. Italy and how he was taking delivery of his Lamborghini boat. I was very friendly. He would pour me a whisky, and I’d pour him a drink. It was a good atmosphere. The situation was very calm and friendly,” Facchinetti said. (Sportskeeda)

This attack can be added to a growing list of instances where McGregor has attacked someone while out and about.

While he doesn’t want jail time for McGregor, the Italian DJ filed a complaint against McGregor, hoping he will learn a lesson.

“There was absolutely no reason for him to lash out at me; it was totally unprovoked. He is a bully. I have been to the police station to make a complaint of assault, and I hope they take action. I did nothing to deserve this. I do not want him to go to prison, but he has to learn that even though he is rich and famous, he can’t go round hitting people for no reason.”