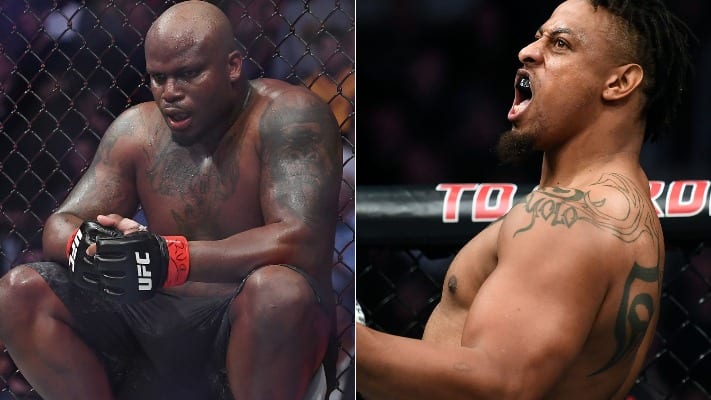 Derrick Lewis is back on the winning track inside the UFC’s Octagon after his decision win over Blagoy Ivanov at UFC 244 last night (Sat. November 2, 2019). With the win, Lewis has been getting a lot of questions about a potential fight with Greg Hardy.

The former NFL star, who has a history of domestic abuse, has been on Lewis’ radar for some time. Speaking to reporters after UFC 244 last night, Lewis said he wants Hardy out of the UFC, as he makes everyone else look bad. (H/T Bloody Elbow)

“I want Greg Hardy to get his ass out of the UFC,” Lewis told reporters. “He’s making everyone else look bad. So, we don’t need him to win no more fights.”

Hardy comes off what was originally a decision win over Ben Sosoli at UFC Boston last month. However, with Hardy illegally using an inhaler in between rounds, the victory was overturned to a No Contest. Now, Hardy has stepped in for an injured Junior dos Santos on short-notice to face Alexander Volkov in Moscow next weekend.

When asked for his thoughts on the matchup, Lewis said he doesn’t think “The Prince Of War” will be able to get the job done.

Do you think Lewis and Hardy will eventually fight inside the Octagon?