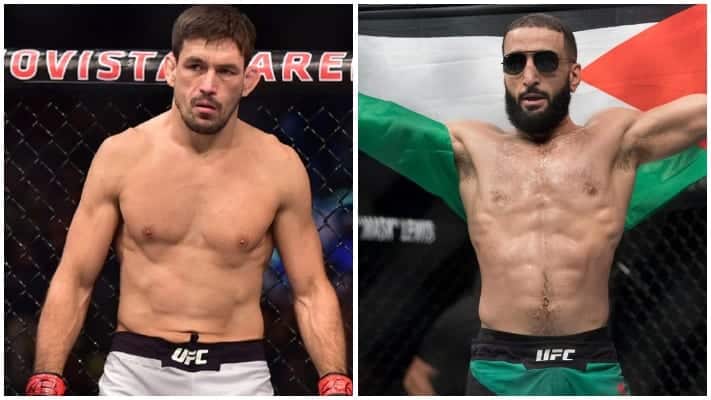 Belal Muhammad will be happy despite not securing the rematch he wanted with Leon Edwards.

According to reports Muhammad will instead square off against Demian Maia at UFC 263 on June 12.

Brett Okamoto of ESPN first broke the news on social media, he wrote.

Muhammad stepped in to replace Chimaev on March 13 at UFC Vegas 21.

Edwards started well and clearly won round one. The fight was over in round two due to an inadvertent eye poke on Muhammad.

Post-fight, Muhammad and many fans called for a rematch.

Edwards was reluctant and has since been booked to fight Nate Diaz at UFC 262.

Muhammad is ranked #13 rank at 170-pounds and was riding a four-fight win streak into his fight with Edwards.

He last beat via Dhiego Lima via decision at UFC 258.

When a fight with ‘Rocky’ seemed to be unlikely, Muhammad called for a bout with BJJ legend Demian Maia instead.

“Obviously I want a big fight,” Muhammad said. “I feel like I still earned a main event spot just being willing to take a fight on three weeks’ notice. A guy I feel like would be a good main event spot with me is Demian Maia. He’s top 10 and I feel like I deserve somebody top 10 coming off four wins in a row, so I think that fight makes sense. I haven’t gone against a real grappler in the UFC yet, so fighting a grappler, it excites me. I wanna just show that side of me and to fight a legend like Demian Maia would be cool.”

The UFC matchmakers where clearly listening as he’s now been booked against the Brazilian.

Maia is on the tail end of his career but still remains more than a match for anyone at welterweight.

Maia hasn’t fought since losing to Gilbert Burns in March 2020.

The loss snapped a three-fight winning streak which included an impressive submission of Ben Askren.

Who do you think wins at UFC 263? Demian Maia or Belal Muhammad?