LowKickMMA.com
Home UFC News Darren Till Says “It’s Only Jokes” And He Isn’t Afraid To Fight... 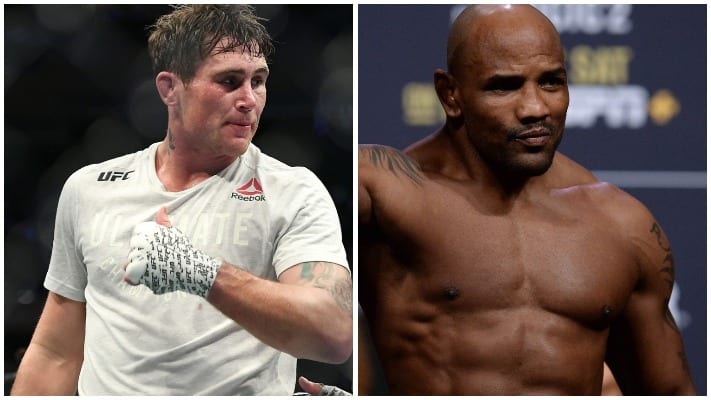 Darren Till has cleared up the situation around a potential fight with Yoel Romero.

The middleweight said post fight at UFC 244 he wouldn’t fight the Cuban as he is too scary. Later he called out Romero on social media but later claimed he was drunk when doing so.

Now he has went on record to categorically state he is not scared of Yoel Romero. He told BT Sports how it was all just a joke, despite some people not getting it. (H/T BT Sports)

“I’m not scared of Yoel. It’s just, don’t take life too seriously. I understand, I realize and I recognize what Yoel is as a fighter, as a human. He walks in here, he’s a specimen. It’s just jokes, mate. People shouldn’t take it too seriously,” he added. “I’ve seen actually a few people take it seriously and I’m like come on, mate. Have a day off from yourself.’ Whether you think Yoel would beast me around or not is totally irrelevant. This is all down to the fact that me saying I was scared of Yoel. And then people are like ‘wow, he’s actually said that. After giving a great interview, he’s just said that. Two, three, four days later, he calls him out and then he regrets calling him out. Then he posts the gorilla running away. It’s all fun and games, mate, really.”

Whether he’s scared or not a fight with the former Olympian seems unlikely – in the near future anyway.

Despite losing his last fight Romero appears to be next in line for a shot at middleweight champion Israel Adesanya.

Meanwhile Till will likely meet former champion Robert Whittaker when the UFC returns to London in March 2020.

How do you think Darren Till would do against someone like Yoel Romero?