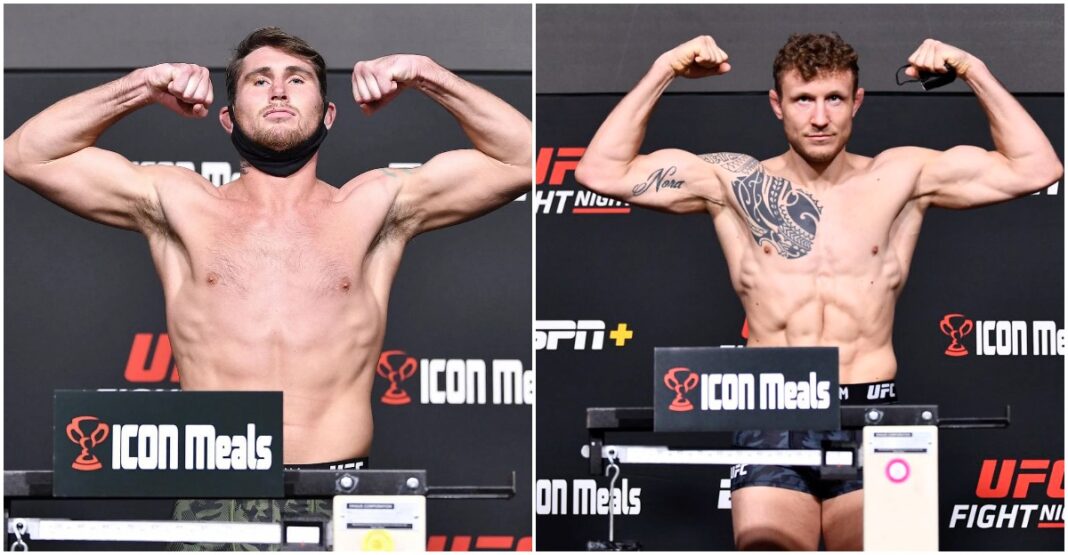 Darren Till and Jack Hermansson have teased fans through a number of social media posts about a potential summer bout.

Days ago, Team Kaobon announced that Darren Till had begun fight camp, but with no indication of the opponent. However, Till shared a screenshot on to his Instagram story of a text received by ‘Gaffa’, which is believed to be by his head coach Colin Heron, reading: “Hermansson has accepted Maynard said you can have the main no problem?”.

Darren Till vs. Jack Hermansson?

With the UFC rumored to return to London on July 23, it’s a high possibility that Till and Hermansson headline the card. This will mark the second time Till and Hermansson have been set to fight one another, with the pairing being scheduled to headline a UFC Fight Night event in Las Vegas in 2020. The Scouser was forced to withdraw due to injury.

Hermanson gladly played along with Till, dropping subtle hints on social media about the matchup, posting a picture captioned: “Darren?”.

Till hasn’t fought since suffering a tough loss to Derek Brunson in September of last year. ‘The Gorilla’ has undertaken a period on the sidelines to recover from a torn ACL and, in that time, has made a viral addition to his training routine by becoming friends with Khamzat Chimaev. The 29-year-old still has aspirations of becoming a champion and claimed after attaining a run of consecutive wins, the Israel Adesanya talks can begin.

On the other hand, Hermansson is also looking to get back to winning ways after undergoing a slight dip in consistency. The Swede’s last outing resulted in a split decision loss to Sean Strickland in February this year. A statement victory over Till would put ‘The Joker’ back in the conversation for the next title contender.

How do you think a fight between Darren Till and Jack Hermansson plays out if the fight is to materialize?