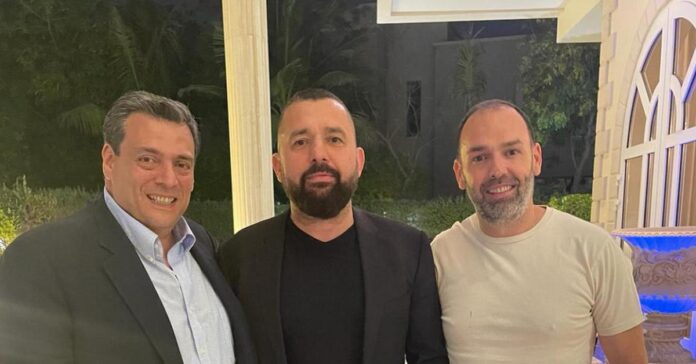 Mauricio Sulaiman, the president of the WBC (World Boxing Council) has described a recent meeting with reputed cartel leader, Daniel Kinahan, as an “innocent mistake” – after the latter was sanctioned by the United States Department of the Treasury, and a bounty of up to $5,000,000 also placed on the alleged drugs baron.

Sulaiman, who appeared at Wembley Stadium over the course of last weekend, watching on as defending WBC heavyweight champion, Tyson Fury successfully defended the governing bodies title with a sixth round knockout win over Dillian Whyte.

Responding to the surfacing of a picture taken back in March alongside Daniel Kinahan and promoter, Ahmet Oner, Sulaiman described the meeting in Dubai with the Kinahan Organized Crime Group leader as an “innocent mistake”.

“Whilst visiting Dubai recently I was introduced to Daniel Kinahan, who has since been place on a sanctions list by the US Treasury Department, concerning alleged links to drug crimes,” the statement from WBC president, Sulaiman read. “This has generated speculation and attacks on myself and the WBC. I, therefore, feel it necessary to make it clear that at no time have we had any relationship with Daniel Kinahan.”

“The World Boxing Council deals solely and exclusively with boxing promoters and only they maintain commercial relations in the certification of fights for our titles. The WBC has had for many years a large number of social responsibility campaigns focused on the prevention and awareness of the dangers of drug use. We have a wonderful program of talks given by a former DEA agent, Rocky Heron, who reaches thousands of people with his presentations. We have rescued many boxers and members of the boxing community around the world from the demons of addictions and we openly and constantly support rehabilitation clinics such as those of Julio Cesar Chavez and Aaron Silva, among others.”

“I made an innocent mistake, due to absolute ignorance of the situation. In this way, I confirm that the World Boxing Council and all its members absolutely reject any action that is detrimental to human beings and we will continue, as always, in total compliance with the laws of all countries in the world.”

Earlier this month at Dublin City Hall, sanctions were placed on Daniel Kinahan, his father, Christopher Kinahan Sr. and his brother, Christopher Kinahan Jr. – with a reward of up to $5,000,000 provided for information which would lead to the transnational organized crime group’s financial disruption, as well as the arrest and conviction of it’s sanctioned members.

Daniel Kinahan, who founded MTK Global alongside former professional boxer, Matthew Macklin back in 2012, was denied as having any ties with the boxing and professional mixed martial arts management firm since 2017, with the firm echoing those claims in a statement released last week where they confirmed they would be ceasing operations at the end of April due to “unfair scrutiny”.

“As a business, we have faced unprecedented levels of unfair scrutiny and criticism since the sanctioning by the US Government of Daniel Joseph Kinahan,” the official MTK Global statement read.

“It is a matter of public record that Mr. Kinahan’s involvement in MTK ceased in 2017, and despite repeated reassurances in this regard, unfounded allegations about his ongoing association with us and our fighters persist.”

“Since leading promoters have now informed us that they will be severing all ties with MTK and will no longer work with our fighters, we have taken the difficult decision to cease operations at the end of this month.”

“MTK prospered because we always put the long term interests of our fighters at the heart of what we do. Our priority in the weeks ahead will be to ensure that our world-class boxers are supported to find new partnerships as swiftly as possible.”

“MTK gyms are operated independently so will remain open for the foreseeable future. Further announcements will be made in due course.”

“Thank you to all fans who have supported us over the last decade.”

Last week, the UAE (United Arab Emirates) also placed a freeze on assets of the Kinahan Organized Crime Group in the region, releasing a statement confirming that they have launched their own investigation amid the sanctioning of its members.

During an interview with UAE channel, SNTV, the aforenoted, Sulaiman insisted there was nothing to hide relating to his meeting with Daniel Kinahan.

“There’s nothing to hide,” Mauricio Sulaiman said. “Neither the WBC nor myself nor any member of the WBC has had or has any dealings with Daniel Kinahan. I’m president of a world organization. I meet hundreds of people every time I travel and I’m always open to talk about boxing and anyone who supports or wants to support boxing will have the WBC ears of support.”

Sulaiman further claimed that sanctions imposed against Daniel Kinahan was not a “major situation” in the world of boxing.

“I can certainly see that it has a great impact in Ireland and (the) UK geographically and because of the news… but there’s much more to any sport than just one person.” (Transcribed by Sunday World)