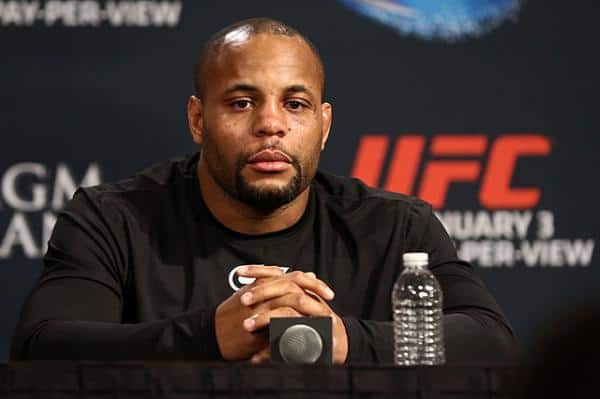 UFC light-heavyweight kingpin Daniel Cormier had a 2015 to remember so far, winning UFC gold at his second attempt, and also landing a pretty sweet job as a FOX host. An obvious company man, the AKA (American Kickboxing Academy) likes to keep an eye on the action, and he has got on board with the idea of Yoel Romero vs. Ronaldo ‘Jacare’ Souza as the next middleweight contender fight.

Check out what ‘DC’ said during UFC Tonight:

DC wants the UFC to book Yoel Romero vs. ‘Jacare’ Souza next and Kenny is on board. Anyone else like this fight?

Given his streak and the recent obliteration of former 205-pound boss Lyoto Machida, it only really makes sense for Romero and Jacare to fight next. There’s a lot going on at middleweight right now, but that is arguably the best match up outside of the championship bout. That being said, ‘Soldier Of God’ should probably lay off the ‘gay Jesus’ comments if he can help it.

Cormier also knows his fair share about switching weight classes, having fought the most part of his career as a heavyweight. ‘DC’ didn’t move to 205 pounds due to a lack of success though, having won the Strikeforce GP as an alternate and transferred successfully to the UFC heavyweight division, it was more the fact that his team mate Cain Velasquez ruled the division back then. How times have changed for both men. Cormier’s championship status at light-heavyweight was born with a dominant submission win over Anthony Johnson at UFC 187, and now he has some advice for another weight-jumper, Lyoto Machida:

DC on Lyoto Machida: Go back up to 205 and take a long break from competition.

Machida’s ugly loss against ‘Soldier Of God’ was hard to watch, and many have called for ‘The Dragon’ to ride off in to the sunset on his legendary status. Romero finds himself aligned with a very dangerous ‘Ronaldo’ Jacare (lols), but there has been talk about top contender Luke Rockhold fighting Souza first, although ‘Rocky’ himself denied it. So what’s at light-heavyweight for Machida if he decides to go back there?

The former 205-pound champion found mixed success at light-heavyweight, winning the belt and defending it once, before going on to lose against Shogun Rua in their title rematch, and getting finished by Jon Jones in his attempt to reclaim the belt. It’s a tough spot for the karate master to find himself, especially given the young and hungry crop of talent that is beginning to rise through the ranks.

Nobody wants to see Machida ragdolled and punished, but light-heavyweight isn’t exactly a walk in the park, should he just call it a day?