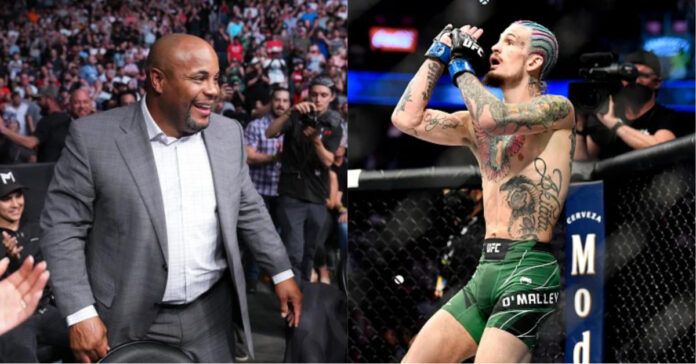 O’Malley expressed that he felt Cormier wants him to lose but also stated that he understands why Cormier doesn’t like him, namely being that he and Cormier’s bitter rival, Jon Jones, share similar body structures.

Cormier, who seems to be on the receiving end of criticism from a lot of fighters, has now responded to O’Malley. ‘DC’ stated that he simply does not care enough about O’Malley to be bothered if the American wins or loses and even gave O’Malley some compliments before reminding us why he (Cormier) deserves some respect.

“It doesn’t really make me feel anything because the reality is like you said Ryan, my accomplishments are all on my own. I don’t care enough about Sean O’Malley to care if he wins or loses because like you said, it doesn’t really affect me. I like the kid, I think the kid’s a fantastic little fighter, I think he’s tough. But the reality is, I got eight championship belts at home. I got eight championship belts at home, Ryan Clark.”

”It’s crazy when we mistake popularity for putting you on the level with someone else the reality is I don’t care if Sean wins or if he loses. I think he’s good for the sport, I think him winning does things for the sport. But I do believe that he uses this to serve as a bit of motivation, everyone goes ‘you need haters to propel you forward so I think he’s trying to make me that but the reality is I don’t really care all that much.”

What do you think about O’Malley’s comments on Daniel Cormier?