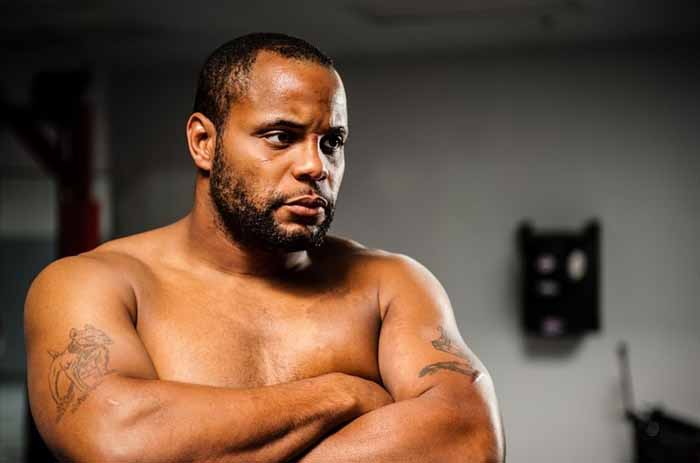 UFC light-heavyweight champion Daniel Cormier has heard his fair share of criticism since claiming the belt at UFC 187. He beat Anthony Johnson for the strap that Jon Jones was stripped of, after the long serving 205-pound champ went in to meltdown. His detractors argue that Cormier’s UFC 182 loss to ‘Bones’ somehow invalidates his current integrity as champion.

Moving forward, Jones has his trial date finally set for Seotember 29th, and ‘DC’ will take on Alexander Gustafsson in the first defense of his newly acquired championship at UFC 192. The media call yesterday featuring Cormier, Ryan Bader, Gus and Rashad Evans was quite eventful, as it sounded as though Cormier had heard Jones’ name one too many times.

“”I couldn’t really give a s— about Jon Jones. The thing that’s really f—– up is, we live our day to day lives normal, we don’t worry about Jones,” Cormier said. “But you ask questions about this guy, and then the headline will make it sound as though I’m over here stewing about Jon Jones.”

“For a long time Jones has kind of been a guy who’s tied to me very closely,” Cormier said. “I don’t anticipate that ever changing. With his hearing being so close, it adds fuel to the fire. It keeps him relevant in the division even though he’s gone. It kind of allows him to stay and cast a shadow.”

Although Jones’ reign of dominance saw him beat all of UFC 193’s most prominent stars, it was also his own behaviour that was the catalyst to his eventual downfall. Cormier makes a point in saying he feels that ‘Bones’ should face real punishment for his actions:

“Every guy on this call, myself, Gustafsson, Rashad Evans, Jon Jones, everyone wants this fight,” Cormier said. “It’s not just me. I’m the one asked about it more because I have the championship. But I think everyone should want him to come back and have the opportunity to compete. … I don’t know what happened, but I do know that in reality, there should be some punishment for his actions. No one should be able to do those things and not be punished with those type of actions.”

Talk of a plead deal and a reduced sentence have led to the opinion that Jones may get off lightly for his New Mexico hit & run saga. It’s not his first infraction by a long shot though, at least in the eyes of the UFC, so perhaps there’ll be some add on from them.

Then again, they can’t really afford to have a superstar draw like ‘Bones’ sat on the sidelines if he’s able to get licensed.