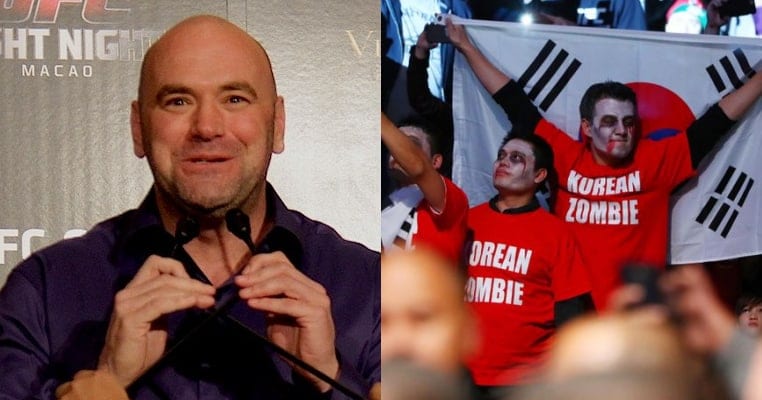 The Korean Zombie made a very big splash…

After three years off fighting and mandatory military service, Chan Sung Jung made an explosive return in Texas. Known for being one of the most exciting featherweights on the roster, ‘The Korean Zombie’ picked up right where he left off. Knocking out Dennis Bermudez in one round, ‘KZ’ showed no ring rust. Considering the length of his absence, a top 10 fight was indeed a huge challenge for Jung.

Making it look easy, Zombie blasted through ‘The Menace’ with a brutal uppercut KO. The aftermath of his win leads to many possibilities for Jung, but the new UFC owners apparently see a big opportunity. According to UFC president Dana White, ‘The Korean Zombie’ could be coming home soon.

Speaking during the FOX Sports 1 post-fight show, as per BloodyElbow.com, Dana White said the Zombie’s win has ‘sealed the deal’ for the promotion’s return to Korea:

“I don’t know if anybody in the history of the fight game has come back after a 3-plus year layoff and looked as good as he did tonight. Dennis Bermudez is as nasty a fighter as you will ever face. He came in tonight with all the advantages, and the Zombie, he performed again. This guy is phenomenal athlete, great fighter, and man, is he a finisher.”

“He pumped some excitement into UFC Korea,” he said. “Ari (Emanuel) and I have been talking about going to Korea, so I think tonight he sealed the deal.”

What a Night For The Zombie

Knocking out Dennis Bermudez and likely scoring a homecoming UFC event, Chan Sung Jung had a great night in Houston. UFC Fight Night 79: Henderson vs. Masvidal was the last trip for the promotion to Korea. In light of White’s comments, you can expect to see ‘The Korean Zombie’ in the main event slot in his home country, and soon.