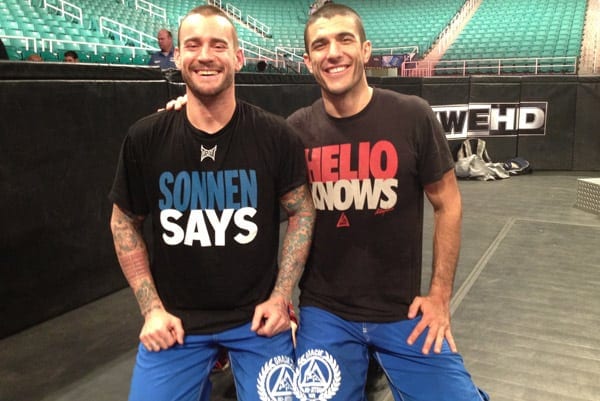 Punk has left the WWE behind and doesn’t appear to be going back. He’s also always been a huge practitioner of Brazilian jiu-jitsu, even appearing in a recent Gracie breakdown of Luke Rockhold’s impressive one-arm guillotine win over Michael Bisping in the main event of UFC Fight Night 55.

His love of submission grappling has lead to speculation that Punk would one day make his way to the Octagon. In New York for this week’s announcement of the UFC’s blockbuster apparel deal with Reebok, White spoke to TMZ Sports about his willingness to discuss a UFC stint with Punk:

“He is a big MMA fan and I like him very much; he’s a great dude. You know I don’t know if he can fight or anything like that but sure, I wouldn’t mind talking to CM Punk.”

Brooks could be a huge draw for the UFC, but there are some very significant hurdles to clear before it becomes a reality. One, Punk is 36 years old and there were rumors that he no longer wanted to keep up with the rigors of a grueling pro wrestling schedule. Competing in the UFC would require him to get back into elite physical shape.

Two, he has a no-compete clause with the UFC in his WWE contract, something that could prevent him signing a new deal with White & Co.

But Punk isn’t the only WWE wrestler who is still rumored to possibly fight in the Octagon, as former UFC heavyweight champion and current WWE champion Brock Lesnar continues to be rumored for a UFC return.

White left the door open by saying Lesnar knows how to get ahold of him:

“I have a great relationship with Brock. He’s with the WWE; he’s doing his thing. “If and when his deal if up with them and he wants to fight, I’m sure he’ll call me.”

The UFC’s lead man moved on to discuss the absolute deluge of top-level bouts that will go down in the coming months after several top stars return from injury. White believes that Jones vs. Cormier is the most anticipated fight right now:

“Well obviously we got this huge block of fights; I’m excited about all of the fights. But, um, the big one that I think that everybody’s buzzing about has to be Jones vs. Cormier. You know the fight when down in the MGM lobby, and ever since that happened people are pretty fired up.”

There’s no doubt that UFC 182’s main event will be a highly anticipated and heated affair, yet White took time to focus on just how huge Alexander Gustafsson’s UFC on FOX 14 showdown with Anthony “Rumble” Johnson will be:

“But the Gustafsson fight is happening in Sweden, we’ve already sold like 28,000 tickets to that thing, so we have a block of incredible fights coming up right now that people are fired up about.”

There are some absolutely huge bouts coming up on the schedule, and 2015 could be the bounce back year that the promotion definitely needs. Will CM Punk and Lesnar be part of those plans?