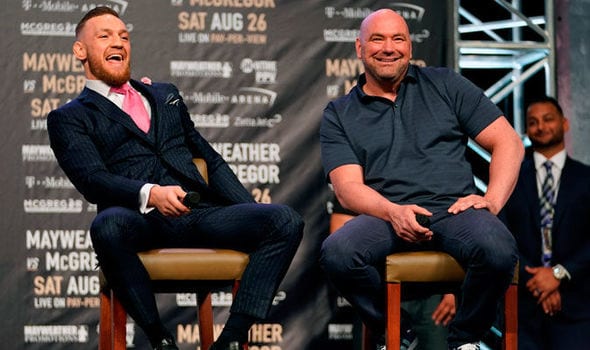 UFC President Dana White went on ESPN last night to discuss upcoming plans for the UFC. One of those names brought up, of course, was Conor McGregor. White was adamant that he and McGregor have not had any discussions in regards to plans for his next fight, when and who he’ll face off against is yet to be determined. He did, however, give his opinion on what he thinks the Irish superstar should do next.

McGregor has had recent interactions on Twitter with Welterweight champ Kamaru Usman as well as former Middleweight Champ the great Anderson Silva. White, on the other hand, seems to have other plans for McGregor, putting his sights on the top Lightweights in the world. He went on to explain, “Conor and I have not talked about fighting if you’re Conor and you’re sitting home – I mean everybody’s calling you out in every weight division. Who’s next? I’m waiting. Who’s going to call him out next? It’s crazy.

“You know Conor and his personality. He’s going to respond to you. Conor and I have not talked about a fight. I think what Conor needs to do is sit back, let a lot of these fights start rolling – and obviously the most important division, the (1)55-pound division – and see what plays out for him.”

Certainly some intriguing options for the Irishman. In time, we will learn what his plans are, but for now speculation is all we have. So what do you think?

Should Conor McGregor take the wait and see approach for his next matchup?