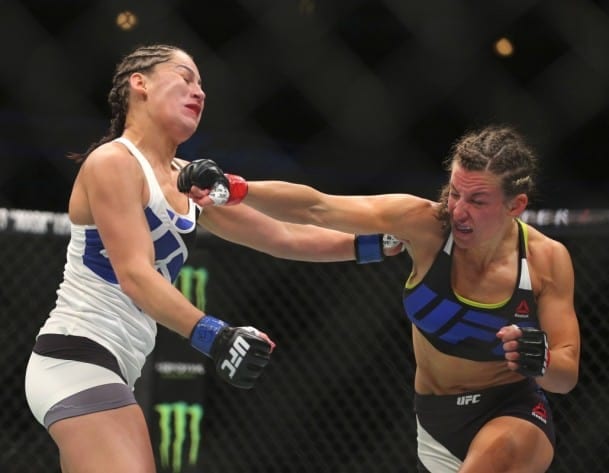 She came through in the clutch (watch highlights here) despite an early flurry of shots from ‘Evil’ Eye, blasting the Cleveland, Ohio native with two monstrous overhand rights courtesy of her new striking and strength training. ‘Cupcake’ nearly had the bout finished on what appeared like several occasions, none more so than a late second round guillotine attempt that Eye was only narrowly saved from.

Although it was ultimately a decision win, it appears to be enough to get her coveted shot at the winner of August 1’s Rousey vs. Bethe Correia headliner. Speaking in a post-fight interview with FOX Sports, UFC president Dana White clarified that Tate would indeed receive the next title bout:

“Yeah, she is. She has fought and worked her way back to Ronda; you know, I’m sure it’ll be excited and a lot of fireworks. Miesha Tate, once again, proves what a tough and durable woman she is. She, Jessica Eye was shredding her, was literally picking her apart in that first round, and Miesha will walk through everything you throw to land what she’s got or get you to the ground, and you know, she pressed the pace. I bet if you sat them two side-by-side, you would think Jessica won the fight looking at their faces, but Miesha won tonight, there’s no doubt, Miesha won tonight, she looked awesome doing it, I’m always in awe of how tough she is.”

White also confirmed that Rousey texting him for updates during the fight as she finalizes her preparation for next week’s grudge match. Now ‘Rowdy’ knows that she’ll be facing Tate for an unprecedented third time if she gets past Correia next week in Brazil as most are overwhelmingly predicting her to do.

Tate appears to have improved striking to go along with newfound strength and power. Is that even close to enough to give the dominant queen trouble in the third match?