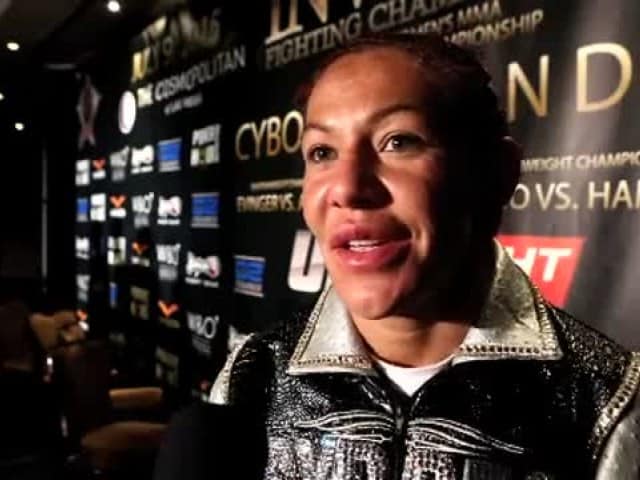 Cris ‘Cyborg’ Justino is once again calling out online ‘bullies’, this time in the form of her fierce rival Ronda Rousey and UFC president Dana White. You’ll remember that ‘Rowdy’ recently spoke out about having body image issues, exacerbated by insensitive comments during a media outfitting session. Evor the crusader, Rousey said she’s looking to squash female body image misconceptions in the media.

Cyborg is calling bullsh*t on this and White’s comments at UFC 172, as she went on the offensive in a recent Facebook post:

“I find it Hypocritical of @rondarousey to complain about people in Hollywood being critical of her body image, talking about her arms or the extra weight she carries between fights.

For the past 5 years this same Ronda Rousey and Dana White have used the media to Bully me, opening the door for other opponents to try the same tactics. Instead of talking about my fighting skills, they would rather use the Media attention to say like I look like a man, or that I Walk like Wanderlei Silva in a dress.””

“These comments are not made to promote a fight between the 2 best female fighters on the planet!! They are said to make me feel bad, and are a weak attempt to bully someone into having lower self esteem.

Whether Ronda accepts the responsibility or not, she is a role model for millions of girls around the world and they listen to what she says, often times imitating her actions. I am glad to see she is more sensitive to the issue of Bullying now that she is experiencing it for herself in Hollywood and hopefully with this comes more maturity and growth as a woman.

I see the results of bullying online everyday, and it is a real problem, because of this I have decided to use my next fight in ‪#‎InvictaFC‬ to bring awarness to online Bullying, more news about my next opponent and fight date to come soon!

It is important that people understand their true value is not in the way that they look, how many instagram followers they have, or the amount of money that they have in their bank account. Our true self worth and lasting legacy comes from the way we treat one another, how well we help our communities, and our ability to serve god.

Online bullying will never go away, but through education I hope we can lead people to see the consequences of their actions, and I am glad to see Ronda Rousey is starting to see this for herself.”

She makes a strong case for sure, what are your thought on Cris Cyborg Justino’s latest rant?