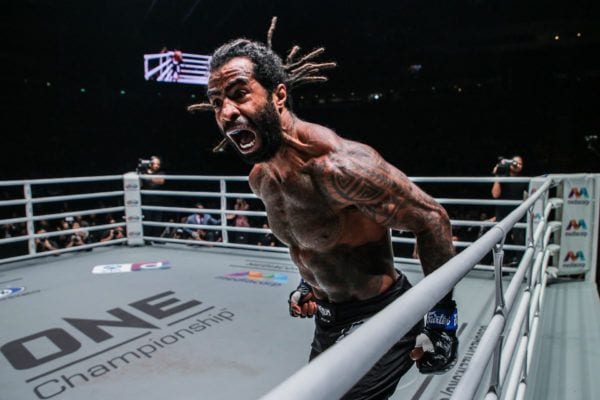 ONE Championship welterweight Cosmo Alexandre scored one of the knockouts of the year in 2019 with his brutal first-round stoppage of Sage Northcutt at ONE: Enter The Dragon.

It attracted plenty of media attention at the time. It also left Northcutt requiring immediate facial surgery as well as an extensive recovery period, which is only now coming to an end. When talking about the fight recently with South China Morning Post, Alexandre questioned what made Northcutt take the fight, given what he had going on in other fields.

“I don’t wanna hurt nobody. The way it happened, I don’t know why he was fighting. He doesn’t need to fight – he was doing some movies already, working as an actor. I don’t know, it’s hard to say because if it is in his heart to be a fighter, I can’t say anything. But in his position I wouldn’t fight, I wouldn’t,” Alexandre said, speaking to SCMP.

At 38-years-old Alexandre is a combat sports veteran with over a decade of professional experience under his belt, so to a certain extent, he understands Northcutt’s sporting ambitions but, as the Brazilian points out, if the roles were reversed and he was being offered similar opportunities, you can bet he would be taking them.

“For me it’s easy to say that because I have 104 fights in just kick-boxing and Muay Thai so I’m kinda tired – ‘Oh, I have to travel again, cut weight, train hard’. For me to say that, ‘Oh no, you just need to stop fighting’, it’s easy to say that. But he has like 10 fights? Of course, he wants to fight more, that’s kinda normal. I wouldn’t fight if I had the opportunities he has, working in the movies, doing all this stuff. But for me I have had more than 105 fights so for me it’s easy to say [that].”

Fans could have expected that after such an impressive performance, Alexandre would have been back competing almost immediately, especially since it took him less than a minute to defeat Northcutt.

However, following his win over Northcutt, the Brazilian has been working on getting a better contract with ONE and with the sides struggling to reach an agreement, fans were starting to wonder when they would next see Alexandre fighting again.

The issue came to a head recently after Alexandre tweeted about his frustrations. Thankfully, this reignited negotiations and a breakthrough was achieved.

“Last Saturday I talked to Chatri, I had a meeting with him, it was kind of a good talk. I see the problem is the company is growing fast and it’s really big now, it’s huge. So sometimes it’s hard to talk straight to him, so he tried to fix my situation.

“Of course, it’s about money, about my purse, and we got a deal now, but I’m just waiting to sign the contract. I’m waiting for them to send it to me. I was one year without a fight because I didn’t want to fight for the same purse, my contract wasn’t good. We are trying to fix that,” Alexandre said.

Now that he has a new contract on the way, Alexandre will hopefully be back competing under the ONE banner in the near future.

Are you excited about seeing Alexandre fighting again?