LowKickMMA.com
Home MMA News Conor McGregor To Train With Real Madrid After Showing Off His Soccer... 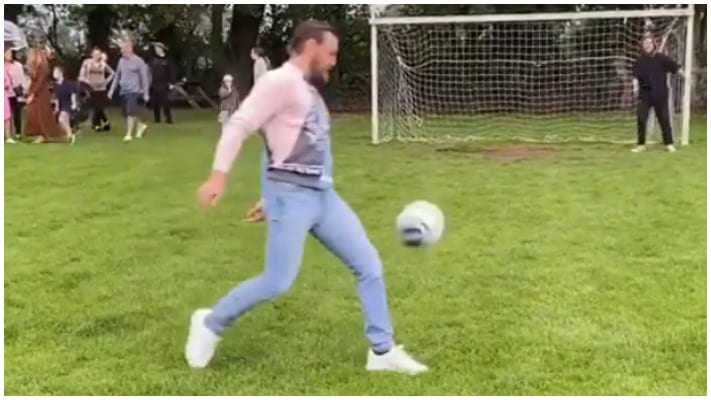 Former UFC dual weight champion Conor McGregor has been showing off his finishing skills outside of the Octagon. ‘Notorious’ posted a series of clips to his social media which show he is a pretty good Football player.

McGregor, who has just returned to Ireland after holidaying with his family in the south of France was seen having a kick about at local club Black Forge FC. The Irish superstar was impressive with his first two shots at goal scoring both. However, he failed to convert the next two as a crowd gathered to watch him in action.

McGregor shared the clips on Instagram and asked for the opinion of Real Madrid defender Sergio Ramos who was seen imitating the UFC fighters ‘billi strut’ just a few days prior.

Ramos responded to praise McGregor’s efforts and to invite him to join a Real Madrid training session, he wrote.

McGregor is likely to take Ramos up on his offer considering he has plenty of free time after retiring from MMA. The 32-year-old took to social media in the aftermath of UFC 250 to announce he is walking away from the sport, he said.

“Hey guys I’ve decided to retire from fighting. Thank you all for the amazing memories! What a ride it’s been! Here is a picture of myself and my mother in Las Vegas post one of my World title wins!Pick the home of your dreams Mags I love you! Whatever you desire it’s yours”

McGregor has become increasingly frustrated with the lack of fight options available to him. ‘Notorious’ has been forced to sit out since defeating Donald ‘Cowboy’ Cerrone at UFC 246 earlier this year.

What do you make of Conor McGregor’s football skills?