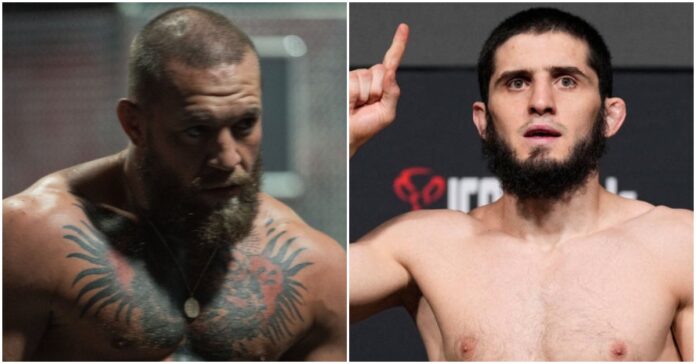 Conor McGregor (22-6 MMA) continues to make his fans guess when, where and who he will fight next, as he continues his recovery process.

After suffering a horrific leg injury in his last about against Dustin Poirier at UFC 264, McGregor is excited to change his current narrative and show fans his “different styles of fighting.”

In spite of the fact, that fight fans won’t get to witness a rematch between, McGregor and Khabib Nurmagomedov. The ‘Notorious’ has set his sights on a possible new opponent, of whom represents the closest match up to ‘The Eagle’ himself, Islam Makhachev.

On Twitter, Conor McGregor expressed his opinion and thoughts on the fighting style ofMakhachev, labeling his latest win over Bobby Green “embarrassing.”

“I’ll fight that shit stain makchavich, no sweat. Embarrassing g’n’p the other night imo. Pitiful punching. McGregor stated. “And then bottles the rda fight after mouthing of him lol. Embarrassing. Watch when I come back. Same as before. Anyone. Any weight. Anywhere. Game full of shit stains.”

“Full mount g’n’p and the guy bounces up not a scratch, huggin and kissin. Talkin bout thanks for the match etc. If that’s me there’s holes left in their head like they been smacked with a sock full of golf balls. Don’t even know where they are. Caramel butter skin strikes again!”

Should we expect Conor McGregor to face Islam Makhachev next?

The answer to that question is that we don’t know. With Dana White still reluctant to rule McGregor out of an instant title match, the possibilities are endless.

However, many fans including Makhachev don’t seem too keen on the idea, especially given the fact that the former UFC World Champion has only competed four times since 2017, where he went on 1-3 run during this time.

Makhachev when asked about a potential match-up with McGregor, after his latest outing, where he laid out his stipulations if that bout was to happen.

“Honestly, I don’t remember when this guy beat someone. He have to come back and beat someone, then let’s go.” (Transcribed by MMA Junkie)

Who do you think Conor McGregor should fight next?