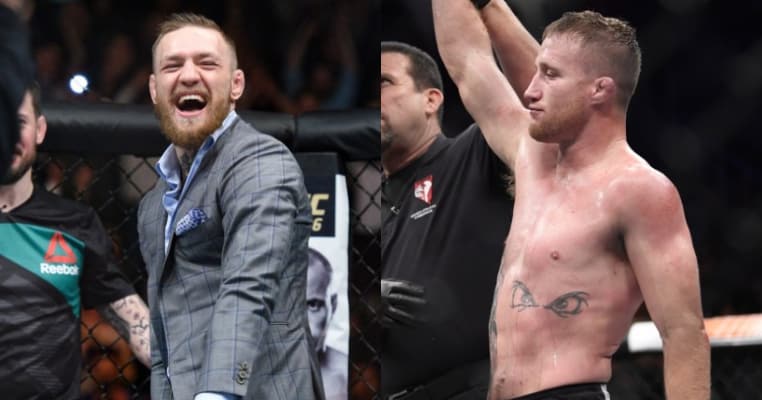 The dust barely settled on the awe-inspiring lightweight main event (watch full highlights here) between Justin Gaethje and Michael Johnson at tonight’s (July 7, 2017) The Ultimate Fighter (TUF) 25 Finale from T-Mobile Arena in Las Vegas, Nevada, when the division’s champion decided to weigh in on the action-jammed slugfest.

155-pound boss Conor McGregor, who’s fully entrenched in a grueling training camp for his ultra-hyped boing match against legend Floyd Mayweather on August 26, still took a brief moment to show his respect for both warriors in the bloody, back-and-forth match. To McGregor, the bout was simply fighting at its core:

That was a good contest. Two fighters, fighting.

Indeed it was two fighters fighting, and the result was an instant classic that will be hard-pressed to be topped as the best fight of this year thus far, if not one of the greatest two-round fights in MMA history.

“The Menace” came into the bout ranked at number five in the deeply talented UFC 155-pound division, and even though former WSOF lightweight titleholder Gaethje was rocked on two different occasions by Johnson, he ended up eating everything he could throw, wading through huge shots like a zombie to land a fight-shifting uppercut that opened up a path for the finishing sequence full of earth-shattering elbows and knees.

The win instantly inserted “The Highlight” at the top of the stacked arena, creating conversations about matching his high-energy style opposite Tony Ferguson and Edson Barboza, in addition to the top grapplers like Khabib Nurmagomedov and Kevin Lee. If he can get past just one of those names like he did versus “The Menace,” he’d arguably be ready for a shot at “The Notorious” in a fight that could legitimately be pegged as one of the most exciting in octagon history, at least on paper.

But that’s still probably extremely unlikely to happen, with McGregor facing Mayweather and most likely to face Nate Diaz, Georges St-Pierre, Tyron Woodley, or even Khabib if he did return to MMA. As for his current conditioning, the Irishman is looking ready to take on any and all challengers:

I am built to run through people. pic.twitter.com/Lx08t2UrVp

Gaethje can obviously take a ton of damage, but could he take McGregor’s vaunted straight left and keep pressing forward?