LowKickMMA.com
Home UFC News Conor McGregor In ‘Best Shape He’s Ever Been’ According To Nutritionist 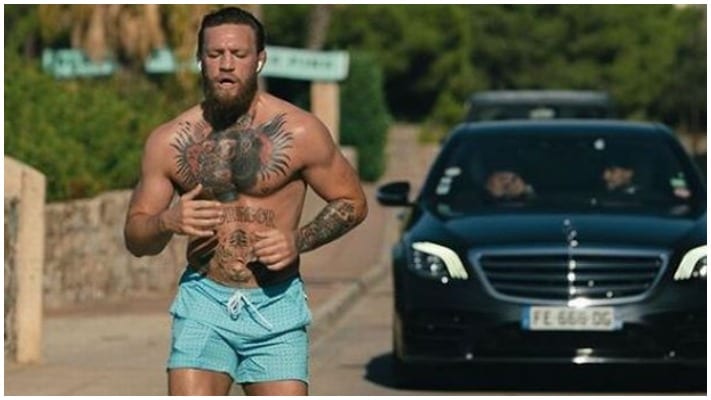 Conor McGregor’s nutritionist believes that his extra preparation ahead of UFC 257 will give him the advantage in the fight.

The rematch against Dustin Poirier will mark the first time McGregor has cut down to the 155-pound limit since losing to Khabib Nurmagomedov in October 2018. While McGregor admits that he was undisciplined during that camp, he has since been taking the steps to stay in peak shape. Tristin Kennedy is a nutritional specialist who started working with McGregor under George Lockhart following the loss to Nurmagomedov. He eventually took over from Lockhart during McGregor’s UFC 246 camp as he prepared for Donald Cerrone. In an interview with ESPN, Kennedy detailed what it’s been like getting McGregor to the lightweight limit in his first fight since January 2020.

“It entails seven-days-a-week work,” Kennedy told ESPN of his duties with McGregor. “Obviously, you get time off and things like that. But it entails daily nutrition plans, supplementation guides, cooking, being at all his training sessions, observing, taking data — the more data you take, the better.

“He’s in great shape,” Kennedy continued. “Consistency breeds success in nutrition. When he focuses on something and gets down to it, he’s the most consistent man there is.”

As key a component as Kennedy has been in McGregor’s transformation, he’ll also be the first to admit that he hasn’t been going it alone. McGregor has assembled an entire team around him to keep in peak physical shape, and everyone has an important role to play.

“In particular, I’m involved with the McGregor FAST workout team, which is mainly Dr. Julian Darby and Colin Byrne. I don’t think they ever get much recognition for their work, and they’re a massive part of Conor’s team. They run the coaching side of McGregor FAST. That’s all cardio and the training.

“”Obviously, head coach John Kavanagh and all these other people are involved as well. It’s a day-to-day nutrition practice, and correlating nutrition plans and protocols and supplementation and all those things around Conor. It’s not just one fixed plan every day. It’s all based on his metabolic activity, his metabolic rate in training. Things of that nature. It’s a very individualized, specific approach.”

Kennedy also made sure to give praise to the man himself. He says that Conor McGregor’s attitude and renewed outlook on the sport has played as big of a part as anything that Kennedy himself could have done.

“I can guide the man, but I can’t eat the food for him,” he said. “It’s up to him to do all that. And that’s what he does in abundance. He stays consistent to it. It’s that hard work and that professionalism. And then you’ll see the results. Like on social media, the kind of condition he’s in. You can see with your eye. But a lot of athletes, they look well, but it’s the performance that really matters. That’s where I take great pride when I see all these fantastic results we’re seeing in how he’s performing.

“Several people have commented already that this is the best shape he’s ever been in. They’re the people that are closest to him throughout all the camps. [Striking coach] Owen Roddy just said it. John Kavanagh just recently said it. I would absolutely agree. I guess going from what I’ve seen and what I know, the man is phenomenal and ready to take on this fight and do well.”

Given how well McGregor has handled the cut to 155 this time around, many fans on social media have wondered if he might possibly return to his original home of featherweight. While Kennedy wouldn’t rule the move out completely, he said it’s not something he would personally like to see the former 145-pound champ attempt.

“He’s a big guy these days. I wouldn’t like to see it from a personal point of view. Everything is achievable. Look at Jose Aldo at bantamweight. But at what cost? Going down so low nowadays — when you see a man who fights at 170 no problem and competes very, very well at 170 and has no issues, why would he go down to 145? Especially when he conquered all that… Right now, it’s 155. Who knows what it’ll be in the future?”

What do you think about Conor McGregor’s new physique? Does it change your mind on how the fight will go?