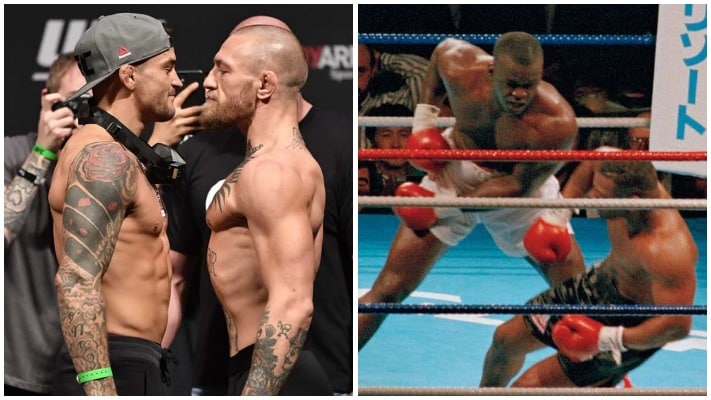 Conor McGregor has compared Dustin Poirier‘s win over him at UFC 257 to arguably the greatest upset in boxing history.

‘Notorious’ entered his second fight with Poirier with one eye on the boxing world as a lucrative bout with Manny Pacquiao was on the verge of being signed.

The Irishman’s hopes for another crossover fight were shut down by ‘The Diamond’ who looked sensational in Abu Dhabi earlier this year.

Poirier wrestled early before utilizing leg kicks and elite-level boxing to become the first man to KO McGregor in MMA while simultaneously avenging his most famous loss which came against ‘Mystic Mac’ in 2014.

In his first meeting with Poirier since UFC 257, McGregor labelled the January fight a “fluke” and compared it to Mike Tyson’s shock to loss Buster Douglas in February 1990.

‘Iron Mike’ was then an undefeated heavyweight champion and firm favourite to easily dispatch of Douglas. However, he ended up suffering a tenth-round KO loss. Douglas relinquished the heavyweight strap in his next fight and never returned to the pinnacle of boxing. He is best known for scoring one of the biggest upsets in boxing history when he beat Tyson.

McGregor will get his chance to prove Poirier scored a fluke win when they square off for the third time on Saturday night at UFC 264.

Do you agree with Conor McGregor? Did Dustin Poirier score a fluke win at UFC 257?