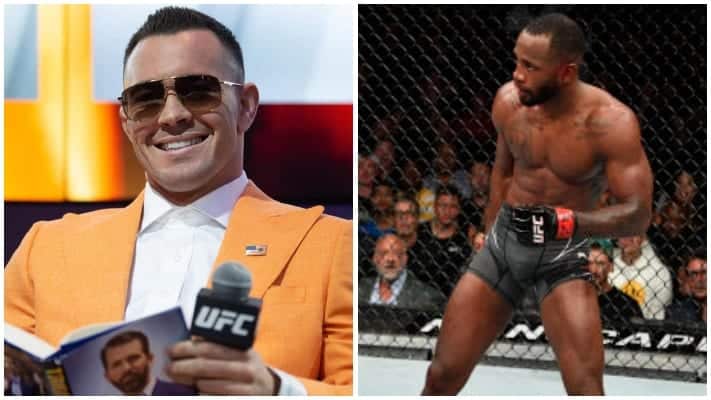 Colby Covington was not impressed by Leon Edwards’ performance at UFC 263.

The Englishman dominated Nate Diaz for the majority of their five-round fight. In the final frame, Diaz wobbled Edwards who was able to survive to score a unanimous decision win.

In an interview with Submission Radio, Covington claimed that Edwards should be nowhere near a title fight after struggling against Diaz.

“I think that’s hilarious. I think Edwards Scissorhands, he’s out here claiming to be this god and he’s ready for a title shot,” Covington said. “Dude, you’re struggling with a lightweight journeyman who has double-digit losses on his record, and this guy is almost finishing you? And you think you need to be in a title shot? That guy needs to go win ten more fights or 20 more fights if he can’t get by Nate Diaz like that. The guy’s a Stockton soy boy. He’s been finished by everybody. The guy has no gas left in the tank. He’s even saying himself he has no motivation left to fight. So, if you’re struggling with a guy like Nate Diaz, there’s no way you belong anywhere close to a world title fight.”

Covington thinks Edwards should square off against Masvidal next.

“I didn’t watch the fights last night, but after you guys were telling me the breakdown of how the fight played out last night, that’s not a title shot-worthy performance,” Covington said. “You need to go out there and solidify yourself as one of the top fighters in the world. And by beating a guy with double-digit losses in the Stockton soy boy Nate Diaz, not by finishing him, that doesn’t earn you a title shot. So yeah, it makes sense. He should go out there and fight another guy. Go fight the fragile guy, ‘Street Judas’ Masvidal. That makes sense. They have the history. Street Judas sucker punched him backstage. Let them fight. So, it makes sense. I agree.”

Do you agree with Colby Covington? Is Leon Edwards not worthy of a title shot following his decision win against Nate Diaz at UFC 263?