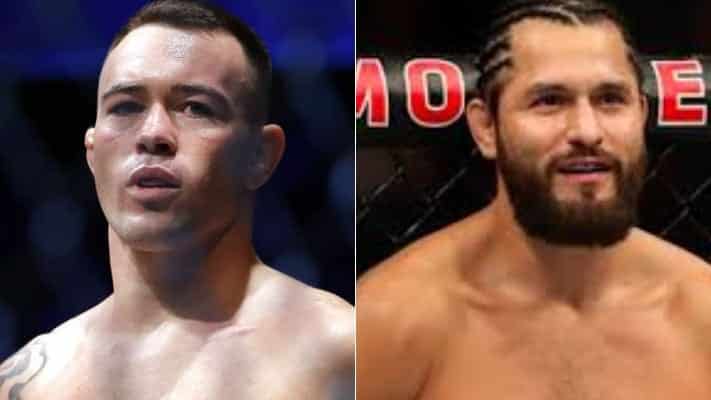 It looks like the next season of The Ultimate Fighter won’t feature Colby Covington and Jorge Masvidal coaching against each other.

The UFC welterweight contenders have been throwing barbs at each other over social media for quite some time. While both men have been positioning themselves for another shot at welterweight champion Kamaru Usman, his recent victories over both of them makes a rematch for either unlikely. However, given their respective rankings, a pairing between the two seems to make sense, and with the UFC looking to reinstate their long-running ‘Ultimate Fighter’ franchise after a nearly three year hiatus, the brash duo seemed like the logical choice to act as coaches. UFC president Dana White even appeared to tip his hand when he said that the coaches for the upcoming season would be from the welterweight division.

Though Covington is apparently on board with the idea, he claims that Masvidal is not. In an interview with Submission Radio, Covington claimed that Masvidal turned down a seven-figure contract to coach opposite him on the upcoming season and eventually face-off at the finale.

“So, the UFC offered him a seven-figure payday, an Ultimate Fighter gig, this heated rivalry,” Covington said. “The only reason I wanted to fight Jorge ‘Street Judas’ Masvidal, we got a vendetta and it needs to be settled, and it’s an easy payday for me, and I was willing to go back. But it’s because of the way he was running his mouth. He said I was fragile, he said he would knock me out, he said he would baptize me to people close to me, you know, saying ‘let’s fight in the parking lot’ in our old gym, let’s go fight in the parking lot at publics, trying to act tough at events in front of Dana. Like, ‘hey, I’ll beat Colby’s ass,’ this and that. That’s the only reason I was willing to go backwards, cause there’s a legitimate personal beef there. This is deeper than just a fight, this is a broken friendship, a complete rivalry now. But what can I do about it? He doesn’t want to fight. He’s scared to fight. He knows what would happen if we fight.”

“So, I gotta move on. I got bigger business to take care of. I don’t need to go back in the rankings anyway I’m the number one welterweight in the world, I’m the number one-ranked, and frankly, I deserve my title shot. Marty Fakenewsman, he got lucky as fuck the first time we fought. I was beating him three to one. The next time we fight, I’m not gotta get poisoned before the fight,” Covington continued. “In the fight, I’m not gonna have Marc Goddard to save him and stop momentum in the fight when I kick him in the liver and they call it a nut shot. That changed the whole momentum of the fight, man. And he had multiple breaks in the fight to catch his wind and regroup and stuff. And it was an early stoppage. I was winning the fight three to one. I want my rematch with Marty. Jorge ‘street Judas’ Masvidal forfeited out of the welterweight tournament, it’s only me and Marty Fakenewsman left at the top of the mountain.”

Covington also said that this was not the first time the UFC tried to bring the Masvidal match-up to fruition. According to ‘Choas’, the fight was initially planned to take place in December or January, but the UFC was unable to make contact that Masvidal’s camp.

“After I fought Woodley, Dana White, Hunter Campbell called me, they wanted to get the fight done in December/January,” the former interim welterweight champion explained. “I was on board, I agreed, I put the pen to paper. But Jorge Masvidal was nowhere to be found. He was hiding. Him and Malki were hiding. They want nothing to do this me. They know what happens when they fight me, it doesn’t end well for them.”

“So, they’ve been ducking me, and they [the UFC] wanted that fight then,” Covington insisted. “And then after he turned down January, they were like, ok, well let’s do the Ultimate Fighter. You know, we can start taping in May, you guys fight as the pay-per-view main event at the end of it in June. And it would have been perfect because I am Jorge Masvidal’s father and I know Father’s Day is in June, so it would have been a two-for-one special. I would have beat his ass, spanked my little son and I would have got a happy Father’s Day.”

While Covington and Masvidal appear on the outside to be on a collision course with each other, that is apparently not the case when it comes to getting the contract signed. The winner of a potential fight between the two would almost assuredly be guaranteed a title shot in their next fight though, which is what both men claim in their ultimate goal. Hopefully Dana White and company can figure out a way to put the pairing together, and maybe even appear on the Ultimate Fighter. The pre-fight trash talk alone is sure to be worth the price of admission.

Do you think Jorge Masvidal is ducking Colby Covington? Who should coach on the new season of TUF? Let us know!