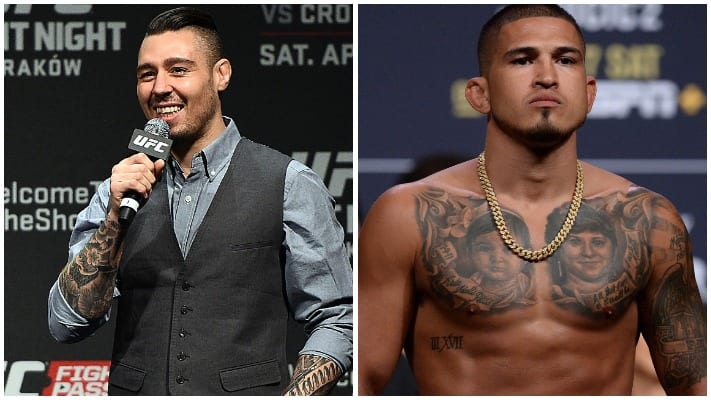 Duke Roufus, who coaches former Lightweight champion Anthony Pettis has claimed a fight with Dan Hardy may well be in the pipeline.

“Showtime” is currently set for a return to lightweight against Diego Ferreira on January 18. However he could go back up to welterweight for a match-up with Hardy.

“The Outlaw” has been side-lined since September 2012, his career put on hold after he was diagnosed with Wolff–Parkinson–White syndrome.

Since then he has created an impressive career in the commentary booth becoming a fan favourite on the mic over the past seven years.

Despite this the 37-year-old has never ruled out a return to competition and has spoken about his desire to return to fighting. According to Duke Rufus, the Englishman has expressed an interest in fighting Pettis. (H/T MMA Fighting)

“I’ve heard through the grapevine that Dan Hardy in his comeback wants to fight Anthony, that’s a good fight,” Roufus said. “Not in any way putting Dan down, I think that stylistically it’s a great fight for both fighters, for the fans, and that’s what we’re trying to do is find good fights that are interesting in our aspects.

“Obviously, fitting for both guys, but at the same time it’s good for Anthony’s brand to fight the people he wants to fight, and his legacy.”

If Roufus is right fight fans are in for one hell of a treat. Pettis and Hardy are both sure to put on a fight of the year contender.

You’ve got to take your hat off to Hardy for chasing such a bigh fight for his comeback. After several years out the game he could be forgiven for looking for an easy touch in his first fight back.

Pettis is certainly no slouch as we saw this year when he scored a spectacular knockout over Stephen “Wonderboy” Thompson. He’ll be hoping for more of the same if he squares off against Dan “The Outlaw” Hardy.

How do you think it goes down between Anthony Pettis and Dan Hardy?