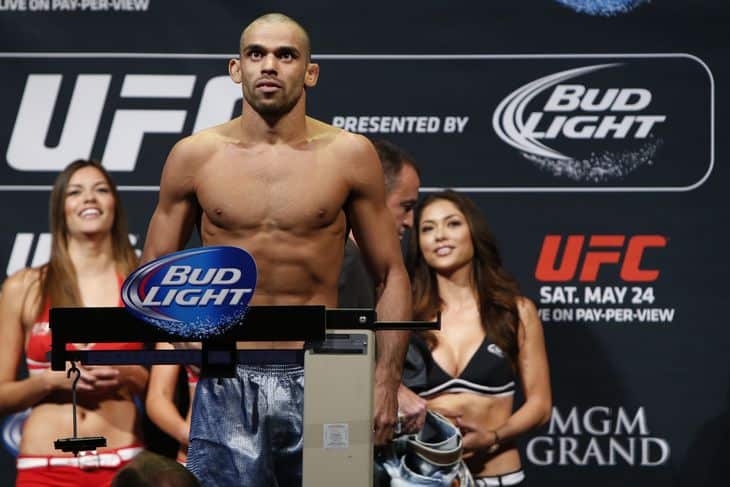 After dropping two losses to current UFC bantamweight champion TJ Dillashaw, and having issues making the bantamweight limit, former 135-pound boss Renan “The Baron” Barao recently made it clear that he would be making the move up to featherweight.

However, according to his coach and the head of Nova Uniao, Andre Pederneiras, the jump in weight is not a definite thing as of now for the former champion:

“Barao moving up or not depends on some factors that I can’t say right now,” Pederneiras told the media in Brazil. “Is there a possibility? Yes. But there’s also a possibility of him staying. We’re studying several things that are happening, and we’ll wait to see.”

No matter his decision, the fact remains that the cut down to 135-pounds is ultimately a tough one for “The Baron”, and that cut could be made tougher with the introduction of some new rules in the near future.

That new rule would be the banning of IV-rehydration which will go into effect some time next full. Without the use of IV, it may even be unsafe for the Brazilian to fight at bantamweight, and Pederneiras is fully aware of that:

However, on the flip side, despite his two losses to Dillashaw, Barao may still very well be one of the best bantamweights on the planet, and another title shot may not be out of the picture completely. Dillashaw is set to put his title on the line against a former champion, and a man many to consider to be the best 135-pounder in the business in Dominick Cruz this January.

If Cruz were to take out Dillashaw, Barao could find himself in a position to earn another title shot. After all, Barao and Cruz were set to do battle in 2014 before Cruz suffered yet another injury.

What’s the best move for “The Baron”?