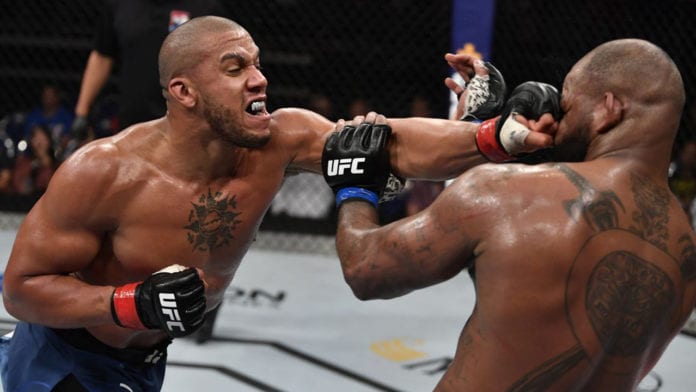 UFC heavyweight prospect Ciryl Gane is not one to call out anyone in particular. That said, he thinks Jairzinho Rozenstruik makes sense for him as his next opponent.

Gane is coming off the biggest win of his career after a second-round TKO finish over former champion Junior dos Santos at UFC 256 earlier this month.

As a result, the Frenchman climbed up to No. 7 in the heavyweight rankings and with not a lot of fighters above him in addition to the fights that are already booked, Gane feels he should be fighting Rozenstruik next.

“This makes sense,” Gane told MMA Junkie. “He is not booked, so we tried to do it for January if I’m not mistaken, but with Christmas he needs time, so we’ll see. I don’t know when exactly, but I think it’s gonna be that guy.

“There aren’t that many people above me. There are fights already booked and Rozenstruik isn’t, so I think it’s probably with this guy. But if you ask me who I want – anyone. I’m on my way, so let’s go.”

Rozenstruik last competed in August at UFC 252 when he also finished Dos Santos via TKO.

With Francis Ngannou set to face current champion Stipe Miocic next, Alistair Overeem meeting Alexander Volkov in February and a fight between Curtis Blaydes and Derrick Lewis expected to be rebooked, that leaves Rozenstruik as the only one available for Gane to fight.

He certainly has a point that it makes sense.

But even if it doesn’t happen, Gane is happy to fight anyone else — preferably in March — as he is very close to the top of the heavyweight ladder.

“I’m really close to the top, and I feel good,” Gane added. “I’m on my way, and I’m confident. So yes, I want to fight and maybe in March because I think for Abu Dhabi it’s a little bit hard to book me, so maybe in March.

Do you want to see Rozenstruik vs. Gane next?